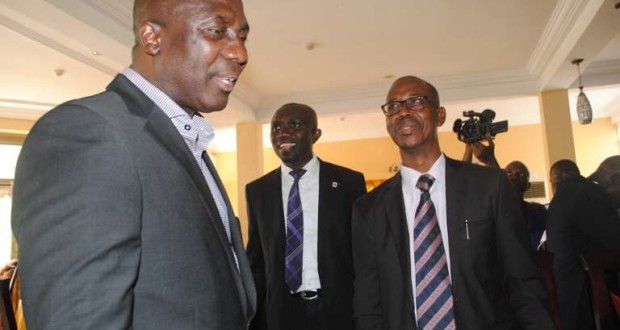 Dr. Abdul-Nashiru Issahaku has been appointed by His Excellency the President of the Republic of Ghana as the Governor of the Bank of Ghana with effect from Friday, April 1, 2016.

Before his appointment as Governor of the Bank of Ghana, he was the Second Deputy Governor and Executive Board member with oversight responsibilities of nine departments including Economics, Statistics, Finance, Legal, Banking Supervision and Financial Stability. He is Chairman of the Investment Management Committee of the Bank and a member of the Bank’s Monetary Policy Committee.

Dr. Issahaku is a member of Ghana’s Economic Management Team. He chairs the Finance and Administration (F&A) Committee of the Ghana Cocoa Marketing Company and he is the Commissioner and Chairman of the F&A Committee of the Securities and Exchange Commission. He was previously the Chief Executive Officer of the Export Development and Agriculture Investment Fund, which he restructured and helped restore to operational effectiveness before his appointment to the central banking 2013.

He has a certificate in Public Financial Management from Harvard University Kennedy School.

He was the Task Manager for Gambia’s Economic Management Programme (2004 – 2009). He also spearheaded the Institutional Budget Support Programme for Tanzania (2005 – 2009).

Dr. Issahaku loves writing and has authored several publications including his much-acclaimed research work on the “Political Economy of Economic Reforms in Ghana”, “Capacity Building for Good Governance and Poverty Reduction in Parliamentary Systems” and “Human Rights, Economic Development and Democracy”.

From the Royal Zambang family of Kunbungu, Dr. Issahaku started his education in Tamale and attended Tamale Secondary School where he obtained his GCE ‘O’ and ‘A’ levels.

He was a member of the school’s Debate Society and a Senior House Prefect. He was a known sportsman at the school and in the Northern Region where he was once the Table Tennis Champion.

Dr. Issahaku is married and has four children.