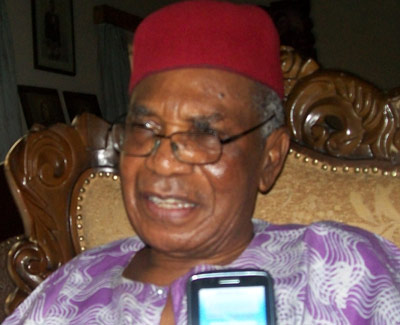 Igwe Ezeoba Alex Nwokedi, a former  Press Secretary to the Head of State during President Olusegun Obasanjo’s military regime and erstwhile Chairman, Eastern Nigerian Traditional Rulers Council and Anambra State Council of Traditional Rulers, says it is unthinkable for  a one-time Speaker of  the  House of Representatives,  Alhaji Ghali Na’Abba,  to want to denigrate  Obasanjo  to score political goal. According to the Igwe of Uthakoneze Achalla in Awka North LGA, Anambra State,  his former boss remains one of the best few fit to advise  President Muhammadu Buhari  on matters  of state. He also speaks on the pro-Biafran campaign. Excerpts:

You must  have read the paper  where former Speaker Ghali Na’Abba lambasted your former boss, Chief Olusegun Obasanjo, asking President Buhari to refrain from taking his advice. How does it sound to you?

First and foremost, Obasanjo is still my boss not my former boss.  Former President Obasanjo is one of the greatest leaders we have in Africa today. You can say anything about Nigeria but you hurt him once you talk about dividing the country.

And you don’t think Ghali Na’Abba should have been speaking for a reason?

It is ignorance. Afterall, who is Ghali Na’Abba and what has he done for this country? Where is his footmark in this country? People just get up, open their mouths and begin to say anything that they like to  get  attention.

General Diya and Mr Ray Ekpu  said Nigerians have  to choose between  supporting and cooperating with the Buhari’s government and move up to their aspired greatness or work against the government and drown. Do you agree?

That is what I am telling you. People should rally round President Buhari and let us have an enviable country. All these criticisms the way they are being done will not help  this country to grow.

But the people criticizing claim, it is their right to do so?

Oh yes. The opposition has the right to speak but the majority carries  the vote and the majority of the Nigerian people are behind the Buhari  government. So, he should not let them down.

Finally, what is your  advice to the government and the people?

My advice to the government is not to be deaf and dumb. They should listen to the people’s agitations and identify the grey  areas  to be corrected.

The media is pointed to as a critical sector for ensuring a great, clean society. Would you say the Nigerian media where you are a father have worked along this line?

These media people are human beings. They have to see things and when they see things they comment. I don’t think they have been unfair, to tell you the truth. I think,

largely, they have been doing fairly well in pointing out the grey areas in our country. They are saying these things to ensure that measures are taken to improve the system.

Government is planning to lower unemployment rate by taking 500,000  graduates into the education sector as teachers. How far  do you think that coming from one sector will help?

What is the population of the unemployed? You see, all these people are just quoting figures and the figures they quote  have always not come to the reality at implementation. That however is  the education sector.

They should ensure that  it goes round.  And I  believe strongly that the construction sector, if paid as and  when due, will absorb a lot of  people.

The new Minister of Works, Power and Housing, Raji Fashola  (SAN), has said that all the roads connecting the 36 states including the second Niger Bridge and Lagos/Ibadan Express road will be his priority. As an advocate of infrastructural development, are you good with that?

Yes. But this is not the first time we have heard that kind of pronouncement. It is the priority of every Minister of Works. Yes, infrastructural development is very important especially the second Niger Bridge. But go and see the first one. It is poorly maintained.

If Fashola can do as he said, it will be very good. But I doubt because, our experience with people in that office in the past has not given us confidence in what they say. It is just hopeful that Fashola will correct that impression in us and right the wrong of the past by ensuring, as it should apply to others in government, that their words are matched with actions.

As a former General Manager, Public Affairs of  the NNPC, you probably would still remember how things are run in the corporation. Why  do  you think the government would give a directive on petrol pump price N86.5 and petroleum marketers would not comply and even the Nigerians who are the beneficiaries  would not cooperate with government by resisting the exploitation by the marketers and would you say therefore that the removal of subsidy as just announced is justified?

Well, as far as I am concerned, this issue of fuel subsidy, we don’t know anything about it in eastern part of the country. We have been buying fuel at unsubsidized rate even ever before the announcement. So, the most important thing is to utilize the money realized from it (subsidy removal) to improve the refineries.

It doesn’t even ever make any difference to the South East whether subsidy is there or not. So, automatically, subsidy removal at this time is order?

Removal of fuel subsidy based on the given circumstances is quite in order.

government actually took charge by reducing the pump price rather their expectation of increase?

The Nigerian Labour Congress said  they were gearing their members to go on strike or what did  they say? Is that a sensible thing to do? We have to work with the government to stabilize the economy and further

create employment. NLC should see to the issue of ensuring steady growth and creation of employment and not deployment in Nigeria. Okay? All this talk about shutting down the system if truly they are

threatening that is unnecessary because, when you have a government which is serious and is seen to be serious about delivering the goods, we better help it to achieve that for our own general good than

You have been vocal about the plight of construction companies who have been incapacitated to pay their workers and have sacked them due to huge debt owed them since over three years by the former government.

This new government says it would pay the debt and move on from there.

(Cuts in) Have they paid? They have not paid.

They should ensure the money is there in the budget. You see, budget is what you plan and you achieve your budget by raising funds.

What I am saying is that, government has not yet paid the construction companies and how that affects the ordinary Nigerians that are sacked from work as a result of inability of the companies to pay their

salaries due to that lack of payment is where I have worry. Once they are paid, all those workers sacked will return to work. I can assure to that as I have advocated for the companies over their money owed for over three years, so I am going to stand on the side of the sacked workers that they should be returned to work once the government pays.

This is because, when workers who are sacked return to work, the security in the country will be very much improved being that there won’t be idle hand which they say is devil’s workshop.

What is the situation now generally regarding the agitations for Biafra? They feel neglected.

Is it true they are actually neglected and how?

It is true, which is the reason this agitation for Biafra is rearing its head again.

What will stop the agitation?

Once there is justice, fair play,  the agitation will stop. In short, we feel highly neglected. Our roads are not done. We have no water. We have no power supply. So, why would people not agitate for a separate state even though that is not the solution to the problem? The solution to the problem is that we should pay more attention to those things which unite us rather those things which divide us.

After Nigeria, the other zone that is on your mind is Anambra State in  eastern Nigeria. What are you doing as a  father figure on the claims and counter-claims between the incumbent and former governors of your state?

What we are doing is to ensure that both of them sheathe their  swords and work together harmoniously for the growth and development of Anambra State. Anambra is one of the states of  the South East. If

each state, at its own pace, can develop its potentials, the entire zone will be great.

What were you told is responsible for the problem?

The former governor said he left some money. The present government said he met N35 billion. What I want to advise them is that you don’t get anything putting the money in the treasury while there are works

to be done. The money is to be spent to improve public utilities. In Anambra State there is no water, no road, no light and we are hearing about giving money and receiving money. I regard all those things as television in the darkness. So, they should utilize the money to improve public facilities. You don’t gain anything allowing the money lying there in the treasury.