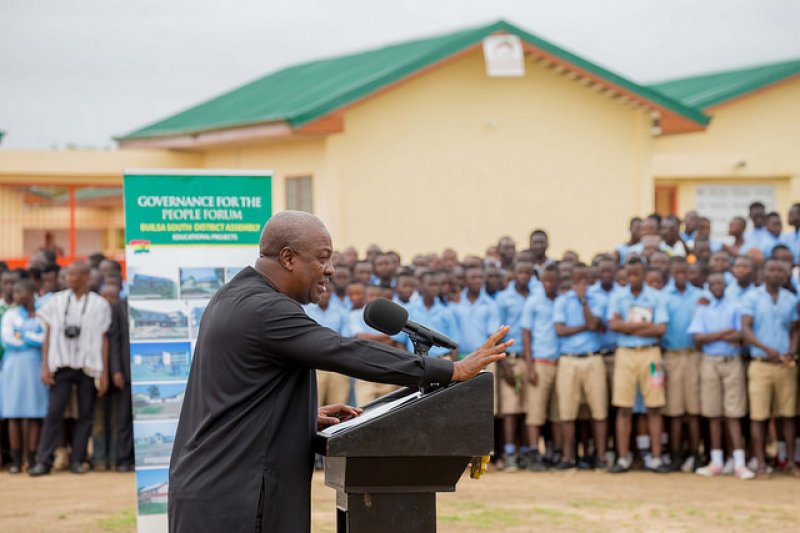 President John Dramani on Thursday launched government’s progressively free senior high school programme for second cycle students across the country, optimistic that the intervention would scale up the quality of the needed human capital for the accelerated development of the country.

Consequently, in fulfilment of its promise and in accordance with the directive of the 1992 Constitution of making secondary education progressively free, government has released some GH¢ 12.2 million to enable the Education Ministry pay for first term of the 2015/2016 academic year.

President Mahama who also commissioned the first of 200 Community Day Senior High School projects to tie-in with the start of the Progressively Free Senior High School programme at a colourful ceremony at Ekumfi Otuam in the Central Region, said both commitments were premised on the quest to improve the quality, expand access and equity in secondary education, and to reduce the cost of secondary education on parents in deprived communities.

The commissioning of the Ekumfi Otuam John Atta Mills Community Day Senior High, and the launch of the progressively free senior high school programme, kick-started government’s determination to overhaul the educational system, to meet the critical developmental needs of the country.

President Mahama said government intended to make going to secondary school free through a progressive adoption of the cost that were currently borne by parents, stating that government’s roadmap for the implementation of the plan was very much on course.

He said though the programme was starting with day students, the intervention would eventually cover those in boarding schools.

“We will eventually get to the stage where every senior high school student would get the opportunity to go to school free.

“But the programme begins this academic year with day students ….it would be progressively expanded to absorb the cost that is currently undertaken by boarding students,” he said.

He said government had further released funding for the Ministry of Education to recruit additional 9,300 new teachers to staff the new schools that were being commissioned.

It was expected that with the construction of the community day senior high schools, the capacity of public secondary education would leap to over 240,000 more enrolment across the country.

A highly elated President Mahama said work was ongoing on the 123 out of the 200 senior day high schools he promised, observing that with the increased enrolment in junior high schools, those structures when completed would be filled to capacity in the nearest future.

He said although the intervention would bring significant relive to parents and households, it should not eliminate responsibility of caring for their wards, calling on Ghanaians to support government’s efforts by ensuring that their wards enrolled and stayed in school.