President John Mahama will on Tuesday, December 20, 2016 embark on a nationwide “Thank you” tour of the country, beginning from the Upper East Region to bid farewell to Ghanaians for giving him four years to serve as President.

He will visit the Upper West, Brong Ahafo region on Wednesday. He will also tour the Eastern, Volta, Ashanti, Central and Western Regions in that order.

The President will be meeting traditional and religious leaders as well as regional and constituency executives of the National Democratic Congress (NDC) as part of his tour.

Mahama is expected to end his tour in the Greater Accra Region on Friday, December 30, 2016.

Akufo-Addo defeated President Mahama by 53.8 percent to 44.4 percent in the general elections.

Mahama had appealed for calm and told his supporters he would respect the outcome of the vote, whether he won or lost.
Meanwhile, President Mahama has been appointed Co-chair of the ECOWAS mediation committee in the political impasse in the Gambia.

He will be assisted by his Nigerian counterpart Muhammadu Buhari.
More here: My presidency is God’s appointed time – Akufo-Addo declares
The mediation committee formed at the 50th ordinary session of the authority of heads of state and government in Abuja has been tasked to ensure Gambian president Yahya Jammeh hands over power following his defeat in the country’s elections. 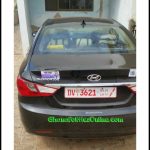