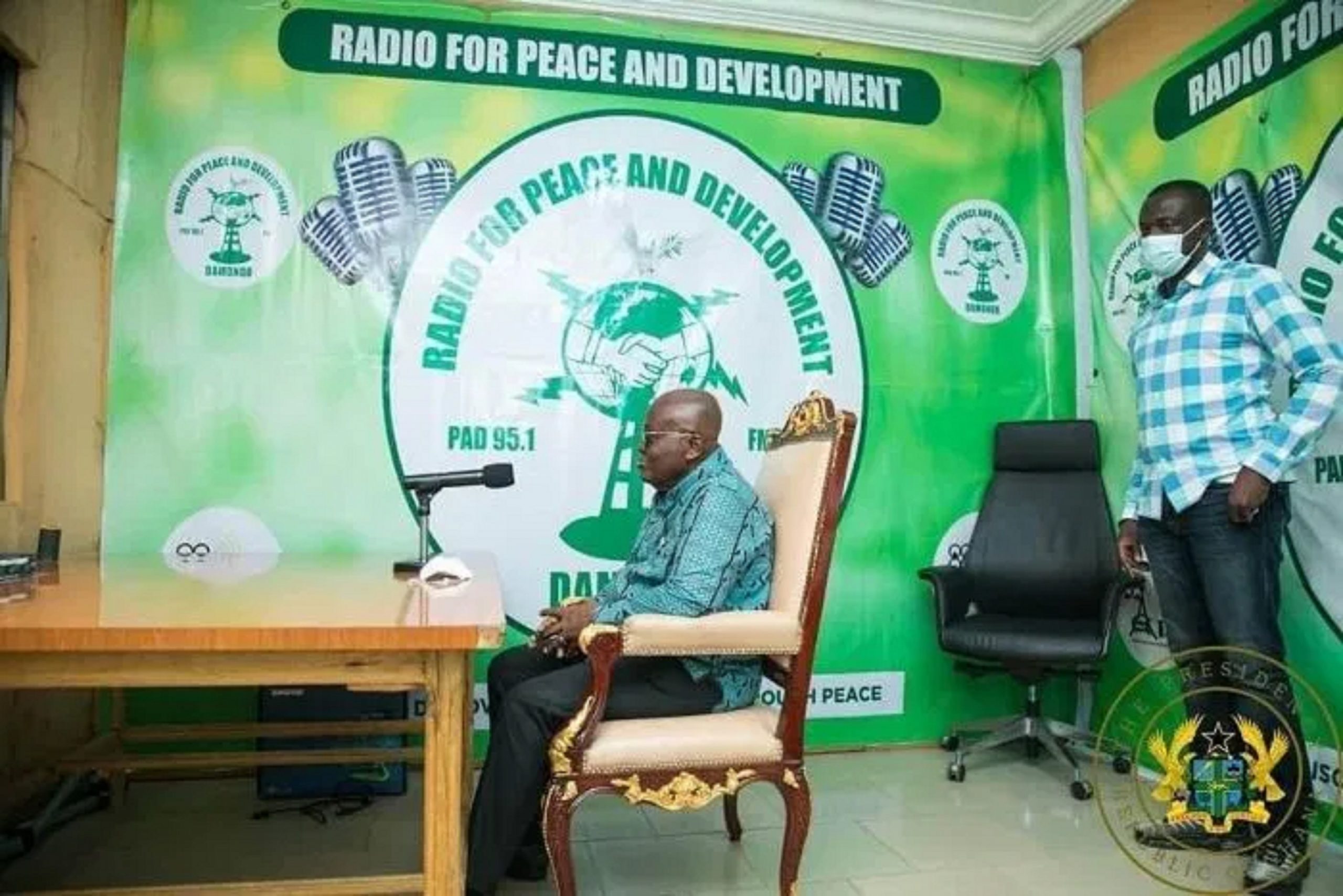 President Akufo-Addo, has given Ghanaians grounds to worry and ask why he moves around the country with his presidential chair, something Ghanaian tradition considers as an insult to a host by a guest, except the chieftaincy setup where traditional rulers are allowed to carry special stools and skins around town to event as symbol of recognition and authority.

The display of monarchical behavior, might not be the news which is annoying many Ghanaians who had seen the act repeated at countless events and asking questions as to the motive behind it, it is rather reports that the Presidential chair is chauffeured in a Toyota V8 Land Cruiser vehicle as part of President Akufo-Addo’s convoy to every part of the country.

Eyewitnesses, have said the chair is kept in a V8 with security guards accompanying it everywhere the President goes.

The chair, has the coat of arms at the upper section and on the upholstery.

The chair is in a special box and carried in a box by dedicated officers in the office of President. What is shocking is that Presidents before him, namely Jerry John Rawlings, John Agyekum Kufuor, late Prof John Atta Mills and John Dramani Mahama, modestly sat on anything they were offered as seats, and never exhibited this show of power and authority.

But President Akufo-Addo, moves with it to durbars, political rallies, even into the studios of radio and television stations for interviews and other programmes, including Wontumi TV and Radio Station, and ATL FM in Cape Coast and many other media houses across the country.

Strangely, the private homes and many other places that under normal circumstance, he would have been offered a befitting chair, have not been spared of the presence of the chair, The Herald has monitored.

The most recent visit of the chair, was President Akufo-Addo’s visit to the home of the family of the late Most Rev. Dr Samuel Asante-Antwi, the former Presiding Bishop of the Methodist Church, who was a founding member of the governing New Patriotic Party (NPP) and its Council of Elders, who passed away over the weekend.

Most Rev. Dr Asante-Antwi, who reportedly died last Sunday morning at the Korle-Bu Teaching Hospital, until his demise, was the chairperson of the Board of Trustees of the controversial National Cathedral.

During the visit to the home of the late preacher to commiserate with the bereaved family, President Akufo-Addo, yet again went with this same mysterious chair. Against all Ghanaian customs, the President threw all tradition to the wind and stormed the house with it.

Coming on the heels of many others, the latest one has sparked concerns, including anger in public places, as well as social media with people mocking the President and his entourage with pictures of Nana Akufo-Addo, sitting on the chair in the home of Most Rev. Dr Asante-Antwi, with many wondering what is informing this decision.

While, some say it may be as a result of a spiritual directive, others say the President is only exhibiting his “arrogance of power” and proud tendencies. Some have likened him to the late Libyan leader, Colonel Muammar Al-Gaddafi, who was known to travel with a lot of these items.

During his tour of the Bono West and Ahafo Regions, President Akufo-Addo, was seen with the same chair.

The chair is currently the hottest buzz on social media as many continue to share.

President of policy think tank, IMANI-Africa, has waded into the fray, questioning why the chair will be carried around in a car wasting taxpayers’ money.

Mr Franklin Cudjoe wrote “Everywhere he goes, the chair goes with him. The presidential chair is now something Ghanaians, have been used to since the President started his tours.

From durbar grounds to radio stations and TV stations, his chair stands. A lot of people think the chair gives the President a status as he sits in you know that’s him. It’s like a throne to him.

Others say, it is good for security reasons. But it seems the chair is also carried in one car which is part of the presidential convoy. Isn’t that too much? Imagine, fueling a car from Accra to Tamale or Aflao, just to carry a chair. What happened to the boot? Is the chair more precious than the taxpayer money?

Another social media users, who attempted an explanation, called on the presidency to offer a reason to satisfy the curiosity of concerned Ghanaians.

But the current president only elevated it. By sending and sitting on it in homes and radio stations. I think it would make a lot of good to the Presidency, if the communications unit offers an explanation”. His explanation did not still satisfy many Ghanaians, who comment on Franklin’s comment on facebook.

The opposition National Democratic Congress’ (NDC) campaign Spokesperson on Finance, Isaac Adongo, has also asked President Akufo-Addo to stop carrying his ‘chair’ around, as it is draining the nation’s coffers.

The Member of Parliament (MP) of Bolgatanga Central, who spoke to MyNewsGh.com after the party’s town hall meeting in Kumasi during the week, explained that aside the government’s ‘bloated’ Ministers and ‘excessive borrowing, the move by the President to carry his chair around in one dedicated field van is also draining the nation’s coffers.

He stated that “President Akufo-Addo when he was campaigning for our votes in 2016 sat on our benches to eat kenkey with us. He sat in our shops to talk to us without bringing his own chair but today, even when he goes to a private wedding or funeral, he carries his chair around. Have you asked yourself who bears that cost?

“Aside he having nothing to show for with his excessive borrowing, he has taken it upon himself to leave huge financial debt before he leaves office. This is what we are against. He must put a stop to piling up our national debt.”

“It is needless for him to be carrying his chair around in a dedicated van. If you could come to our shops and eat kenkey with us on our benches, what is the rationale behind you fueling a van and locomoting your chair around?