Former President John Dramani Mahama is in South Africa and will on Thursday deliver the keynote address at the African Leadership Magazine (ALM) Person of the Year 2016 Awards Programme in Johannesburg.

The former President will be speaking on the theme, “How can Africa win the progress race?”

President Mahama is expected to be decorated with the African Political Leader of the Year Award for his contribution towards deepening and enriching Ghana’s democracy and his towering status as one of Africa’s best.

In the words of the Chairman of the International Advisory board of the ALM Awards, Ambassador Joe Beasley, “it is gratifying to know that Africa still has leaders like you bestriding the political space.”

He also noted that Mr. Mahama made significant contributions to Ghana’s economic growth and development; spearheaded and completed some ambitious projects; went into the elections and respected the wishes of the electorate – a feat uncommon amongst many leaders in the continent.

“Africa has found in you and leaders like you, the perfect Apostles of Good Governance and Democracy, who would help in spreading the gospel to the rest of the continent.”

Mr. Mahama will also be presented with the Georgia Congressional Commendation from the Georgia Legislative Black Caucus during the event. 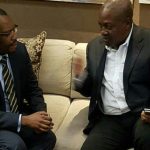