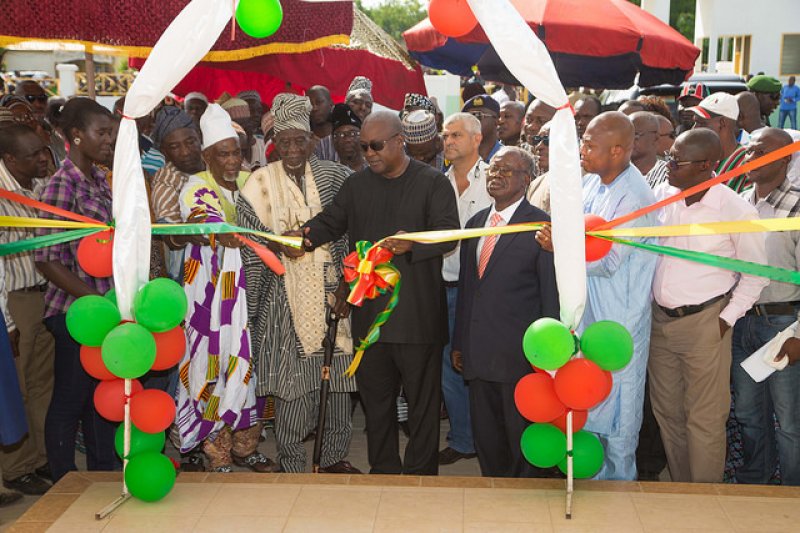 In a bid to bring back the age old culture of reading among the youth, a new ultra-modern library complex has been inaugurated for the people of the Upper west region.

The three hundred and 53 seating capacity library is a GETFUND project.

President John Mahama, who inaugurated the facility as part of his Accounting to the People tour of the region charged the youth to take advantage of the modern library to equip themselves with modern trends in relation to the job market and other educational ideas.

The library project is one of many to be built in all regional capitals.

Meanwhile President Mahama, has inaugurated a Community Water Project for the people of Walembelle in the Sissala east district of the Upper West Region.

Similar water projects have been provided for ten other communities in the region.

Radio Ghana’s Presidential Correspondent, Pascaline Adadevoh reports that, gone were the days when it was fashionable to see students’ troop to community libraries not only to read but also borrow some stories books.

Today not only have that culture died down but the libraries have all broken down and neglected.

Government is embarking on a revival agenda of bringing back community libraries.

The Old Upper west regional library was built in 1977 and has outlived its usefulness.

The new modern library has a special place for children particularly to have access to educational materials tailored for them.

President Mahama, encouraged the young ones to spend their time productively at the library gaining knowledge

The President assured the people that government will soon make a case to the ministry of Finance to recruit more Librarians to man the libraries.

President Mahama, also announced that government is studying a roadmap by the Expert Committee of Education to make each of the three campuses of the University of Development Studies, UDS become autonomous.

This falls into the vision of government that at least every region gets a public university. Later President Mahama, inaugurated a Community Water Project for the people of Walembelle in the Sissala East district.

Apart from Walembelle, ten other towns are benefitting from a similar project

President Mahama, said government has worked this last few years to ensure that the country is self-sufficient in basic amenities.

On the start of his tour of the Upper west region, President Mahama, inspected work on a hundred and eighty bed capacity Wa Regional hospital. Soft inauguration of this project is scheduled for October this year.