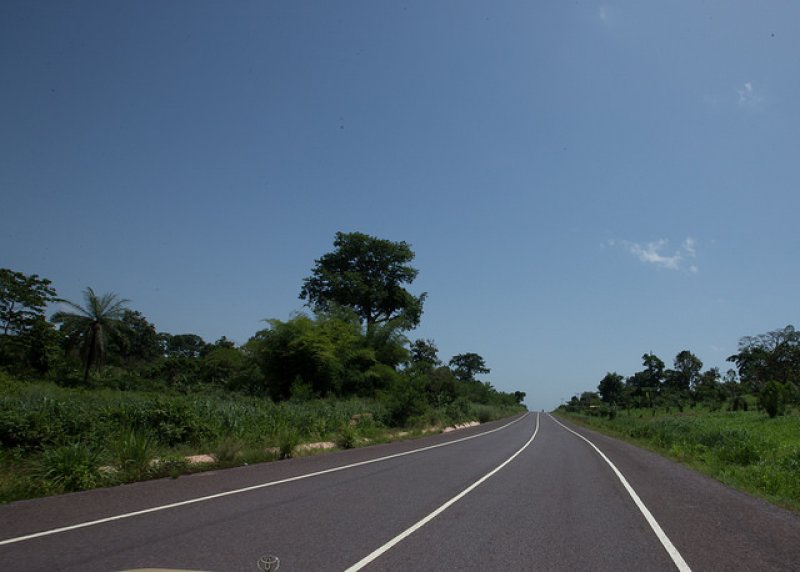 President John Dramani Mahama, says his first term in office has exhibited a phenomenal track record that guarantee’s another term.

Addressing the Chiefs and people of Hohoe in the Volta region as part of the “Accounting to the People tour,” President Mahama stated that his government would ensure that development reaches every nook and cranny of the country.

The President had earlier inaugurated the first completed stretch of the Eastern corridor road from Dodo-Pepeso to Nkwanta.

The Paramount Chief of Akpafu, Nana Afrifa Akuamoah, who spoke on behalf of the Chiefs at Hohoe described President Mahama, as a listening President.

Characteristic of the region that is referred to as the World Bank or the IMF of the National Democratic Congress (NDC), President Mahama and his entourage were virtually mobbed by residents of Hohoe.

All through the journey, the convoy was stopped at almost every junction by some youth just to catch a glimpse of the number one gentleman and get him to speak to them some few words.

President Mahama, had earlier inaugurated a 46 kilometre stretch of the Eastern corridor road from Dodo Pepeso to Nkwanta.

He has also inspected some road projects before addressing the Chiefs and people of Kadjebi.

The Kadjebi township road is currently undergoing asphalting and there are a number of ongoing projects including a new district hospital.

From Kadjebi, President Mahama made a final stop in the Hohoe Township, where Chiefs from all the paramountcies had converged to welcome him.

On behalf of the Chiefs in the Hohoe traditional area, the Paramount Chief of Akpafu, Nana Afrifa Akuamoah, extolled what he described as the sterling qualities of President Mahama.

He thanked the President for his intervention in ensuring peace in Alavanyo and Nkonya.

Nana Ntiamoah, also recalled how the government responded swiftly to some issues concerning the town.

President Mahama, outlined his plans for the Hohoe township.

He said with the asphalting of the town roads as well as the Eastern corridor, Hohoe inadvertently becomes a commercial town.

He assured the people that the Hohoe Fodome road will soon be awarded on contract.

As he has always done, President Mahama called on people who have turned eighteen this year to go and register in the voter registration exercise which opens on the 28th of this month.

Hohoe and surrounding towns were known in the past for their booming cocoa sector but the fortunes have dwindled with time.

President Mahama, said the Ghana COCOBOD will assist interested farmers with free seedlings and inputs to start the cocoa farming.