The National Democratic Congress (NDC) has stated that an advertisement of President John Mahama in the Daily Guide, a newspaper owned by the acting Chairman of the main opposition New Patriotic Party (NPP) – Freddie Blay – and his wife, Gina, is not from the NDC’s headquarters.

Mr Koku Anyidoho, a Deputy General Secretary of the NDC told Prince Minkah on Clas91.3FM’s Executive Breakfast Show on Tuesday, 27 September that: “I really do not know who placed the adverts in the Daily Guide. It is not from the party headquarters.”

The advertisements of the NDC and President John Mahama are in connection with the December 7 polls. Mr Mahama is seeking a new four-year term.

The paper followed a similar trajectory in the run-up to the 2012 elections, carrying advertisements of Mr Mahama.

Asked by Prince Minkah if it was a bait from the NDC, Mr Anyidoho said he “does not know because the adverts do not flow from the party headquarters”.

He indicated that the owners of the newspaper should be questioned about it “because they will be best placed to tell us where the adverts came from but certainly not from the NDC headquarters”.

He continued: “If you ask me, I will not place an NDC advert in the Daily Guide, I will not.” For him, if it was a bait and Mr Blay had fallen for it, that proved that “he is not a man of conscience…he only thinks about himself and his stomach”, adding: “Anything that he does is about what he can personally gain. He does not care about the NPP but only his business and himself.” 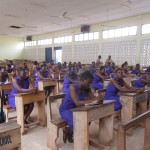