President John Mahama has commissioned a five-kilometer township road at Kyebi in the East Akyem municipality.

The road is among several others being rehabilitated under the Cocoa Fund.

The president commissioned the 5 km road as part of his six-day campaign tour of the Eastern Region.

The road is among several other poor roads in the Abuakwa South Constituency receiving rehabilitation works. Addressing a rally at the Kyebi Lorry Park, President Mahama said his government intends to improve the conditions of more roads with the Cocoa funds.

He emphasized that several countries have developed by building critical social infrastructure, a reason why access to water in the municipality has increased to 76 per cent from 58 per cent.

He jabbed his accusers for the short supply of water at Damongo, his hometown, and reacted that the water system there had a technical challenge. 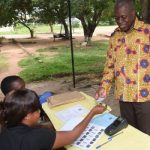