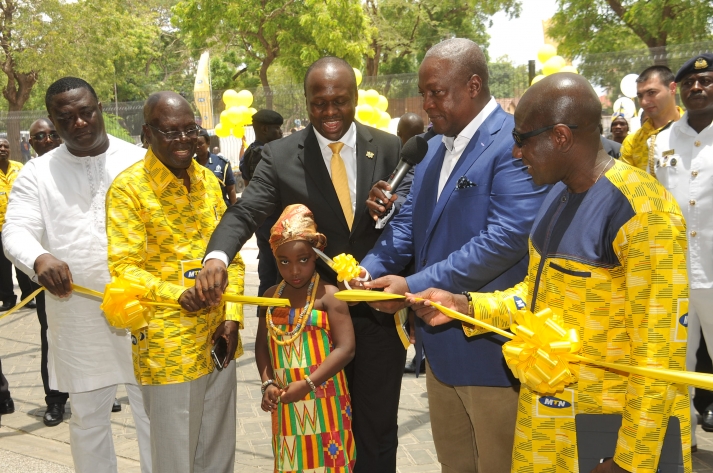 President John Dramani Mahama has hailed the decision by mobile network operator, MTN, to allow Ghanaians a share in its ownership.

The company would be ceding 35 per cent of its shares to Ghanaians.

Tracing the genesis of the booming telecom industry of the country, the President said mobile telephony today constituted one of the major players in national development.

President Mahama, who has been a part of that history, first, as Deputy Minister of Communications and as Minister, Vice President before becoming President, stated that in all the http://ghanapoliticsonline.comstrides made, MTN remained a giant that must be celebrated.

In 2005, MTN posted a strong performance with a profit of about GH¢2.42 billion.

It paid GH¢675.6 million as taxes to the government, representing about 70 per cent of the total tax the Ghana Revenue Authority (GRA) collected from the telecom sector.

Today, MTN has over 16 million subscribers constituting more than 50 per cent of the market share.

The company’s social intervention initiatives had also brought hope to millions of people in the country.

It was on such impressive records that the President remarked, “MTN is here to stay forever.”

Touching on quality of service, the President asked the telecom companies to pay attention to the improvement of services for customers.

He said with the passage of time, Ghanaian customers had developed huge appetite for quality for which reason telecom companies must be able to satisfy them in order to stay in business.

Taking a look at the development of technology, the President said the situation represented unlimited opportunities for Ghana.

The country, he stated, had an enviable fixed telephony which could even be developed further.

President Mahama gave the assurance that the government would continue to support the telecom sector to grow.

He mentioned the Eastern Corridor Fibre Optic backbone that was inaugurated last year as one of the many initiatives that the government had undertaken to boost the sector.

The Western Corridor Fibre Optic backbone, when deployed next year, will, among other benefits, boost the oil and gas industry.

He said the path MTN had taken was one of progress and there was no turning back.
– See more at: http://www.graphic.com.gh/business/business-news/60836-president-lauds-decision-of-mtn-to-share-ownership.html#.dpuf