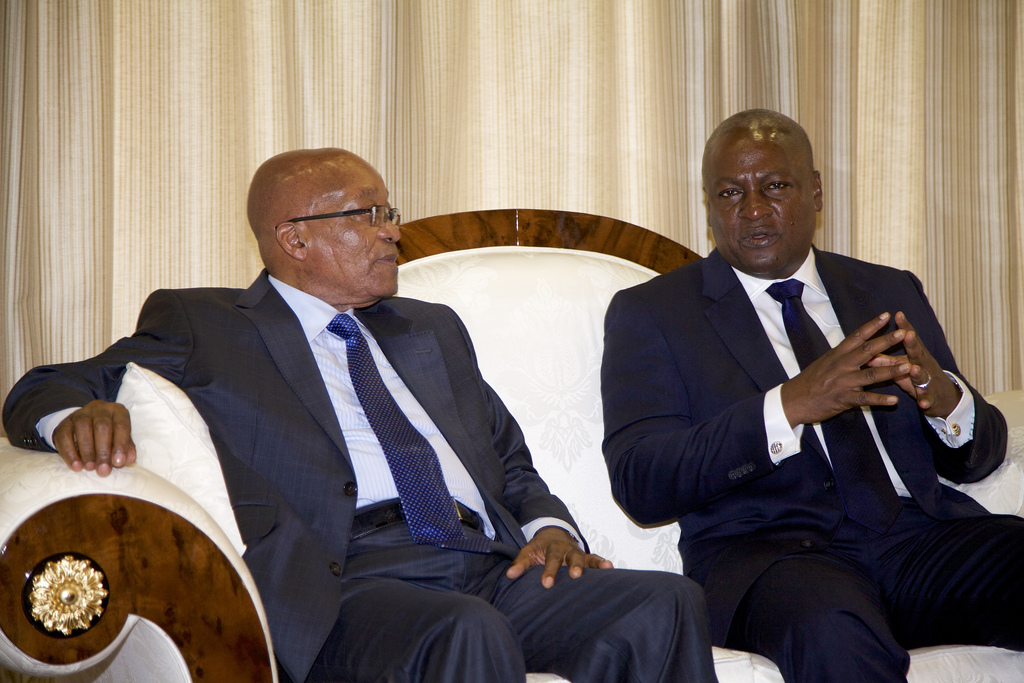 Former President of Ghana His Excellency John Dramani Mahama and South African President Jacob Zuma are set to participate in a high-level dialogue in Pretoria, South-Africa.

The dialogue with President Jacob Zuma will come off after a “Expert Seminar” where His Excellency John Dramani Mahama is expected to speak on the Dividends and Deficits of African Democracy.

The theme for this years event is Africa’s Democratic Dividends and Deficits: Commemorating the 10th Anniversary of African Charter on Democracy, Election and Governance.

The African Charter on Democracy, Elections and Governance (ACDEG) was adopted on 30 January 2007 during the 8th Ordinary Session of the Assembly of the African Union (AU) and came into force on 15 February 2012.

It aims at reinforcing the commitment of the AU Member States towards the promotion and consolidation of democratic governance and human rights on the continent.

It takes inspiration and roots from several decisions, declarations, resolutions and normative instruments of the Organisation of the African Unity (OAU) and subsequently AU.

These included the 1981 African Charter on Human and Peoples’ Rights; the 1999 Algiers Decision on Unconstitutional Changes of Government in Africa; the 2000 Lome Declaration on the Framework for an OAU Response to Unconstitutional Changes of Government; the 2002 OAU/AU Declaration on the Principles Governing Democratic Elections in Africa; and the 2002 Constitutive Act of the AU.

2017 marks the 10th Anniversary of the adoption of ACDEG, offering an excellent opportunity to reflect on the past, present and future democratic governance situation in Africa.

As part of the commemorative activities, AUC through the Department of Political Affairs (DPA) as the Secretariat of the African Governance Architecture (AGA) will convene an Expert Seminar under the theme Africa’s Democratic Dividend and Deficits: Commemorating the 10th Anniversary of ACDEG.

According top GhanaPoliticsonline.com The Seminar that is intended to take stock of the achievements, challenges and prospects of the democratization process of Africa through the ACDEG lens is scheduled to take place from 4 to 5 December 2017 in Pretoria, South Africa.

The expert Seminar will be followed by a High level Dialogue from the 6th to 8th December also in Pretoria which will be addressed by President Jacob Zuma of South Africa and HE John Dramani Mahama.