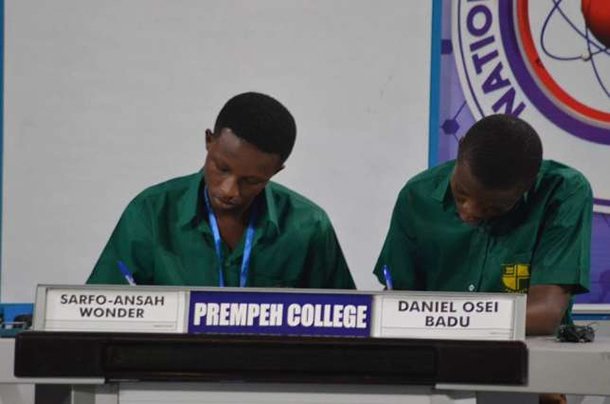 Prempeh College reclaim the title from Adisadel after surrendering it to the Cape Coast school in 2016. The duo -Wonder and Daniel- proved tough for Aquinas team – Anamalia and Bright.

Prempeh College win their fourth NSMQ trophy to keep up the chase with five-time winners Presec. Adisco could not defend their title back-to-back. That record still stands in Presec’s name.

Prempeh College is finding it hard to celebrate after an emotional run-in which saw Aquinas resurge, slash Prempeh’s 7pt lead until the Old Toms stutterred in the final two questions to lose points.

It left Prempeh College hanging by the thread. But a thread-bare win is a win.

For the next 12 months, Prempeh College from the Ashanti region will have the bragging rights in science and maths in Ghana after winning the NSMQ by a shade. Two points settled the competitions.

Prempeh College you had a small scare at the end there. But you did it. Congratulations.

It is an easy fourth round for Prempeh and Aquinas. Nothing changes after four rounds. the trophy has been brought out as we enter the final round. The sight of it triggers Prempeh celebration from the stance. It is theirs to lose after winning three out of four rounds. Aquinas are still in the fight.

Prempeh College are keeping Aquinas at bay in this round of true or false. Adisco is sinking. It’s now almost a two-horse race.

After R3: Scores so far:

In an air of exasperation, quizz mistress says to Adisco ‘you could do anything with the problem of the day. On humanitarian grounds I give you 1 pt. Aquinas gets the same dressing down.

This Problem is a maths question which makes Aquinas and Prempeh the favourites looking back at their previous performances in maths-themed questions.

After getting trapped in their seats since 9am, fans are walking out to get some fresh air. The chants have completely died off. No less from the defending champs.

The schools are trying their hands on the 10-pointed question in Round Three also known as Problem of the Day. This is where ‘top dogs’ establish dominance. Adisco need this Round most badly.

At the end of the second round

Edgy second round among the three schools. Last minute scrappy come-back from Adisadel. It takes two of them to answer questions right. Aquinas is working themselves up. Prempeh is quiet.

At the end of the first round

Prempeh College miss a question about semens and sex. Adisco and Aquinas get their sex questions right.

Not the best of starts for the defending champions – missing major questions, gifting opponents with bonus points.

The boys are out. This is their biggest stage in these teenage years and the pressure here is certainly unsettling for them but they must try to keep their heads above the water.

The defending champions got here after shrugging off challenges from New Juaben SHS, Takarodi SHS, Suhum SHTS and Nkroful Agric SHS – quite a straight forward route.

At a heated semi-finals, Ghana National College would feel they helped Adisco through after answering the last question to deny University Practice SHS any chance to overtake the defending champions.

They went ahead to make a riddle and a ridicule out of Presec at the semi-final clash along with Kumasi High SHS.

Prempeh College, the 2015 champions, made mince meat out of GSTS at the quater-final stage with 82 pts to break Aquinas’ record and set the highest score so far at the NSMQ 2017. It was a case of patricide as Prempeh College ‘murdered’ their so-called academic father Mfantsipim at the semi-final stage to make it to the second finals in the last three editions.

Jachie-Pramso, Ada SHS and Ketasco are getting rave reviews from the organisers for kicking out some big names like Opoku Ware SHS and Pope Johns’ SHS.

Needless to say, this place is parked – inside and outside.

If you tell the fans here its a science and maths quiz, you could be told to tell it to the marines. For the thousands here with no science background, this is a social and bragging rights contest.

Feisty chanting fans here have had to be held in check through the strenuous effort of soldiers and weary organisers.

Old Toms of Aquinas outnumber the two schools but Prempeh College outnumber them when it comes to the trophy cabinet of the NSMQ.

135 schools began, only three remain as a triangle of schools from the Ashanti, Central and Volta regions square it off at the National Theatre.

The prize is the 2017 National Science and Maths trophy.

At this stage which school is most intelligent is an awfully misstated question.

They all are. This stage is about which set of teenagers can handle the psychological pressure to bag bragging rights for the next 12months.

The venue says it all. National Theatre is a place of Drama. Drama is emotional, emotions can be psychological.

An Alex Ferguson pep talk will work much better than a teacher helping with revision.

There are many ways to find which school to support if none of them are your alma mater.

You can use the regional route or the religious route in which case Adisco is for the Anglicans, Aquinas for the Roman Catholics and Prempeh College for the Presbyterians and Methodists.

Sorry if your church school is not here.