The errors which formed basis for the disqualification of the Progressive People Party flagbearer appears to have increased from 1 to 105, Joy News has learnt.

Lawyer for the PPP flagbearer Ayikoi Otoo confirmed this to Myjoyonline.com hours after the EC had been directed to allow all presidential aspirants to correct all infractions on their presidential nomination forms.
Deputy Director of Communications at the EC Yusif Ayuba, however told Joy News he is unaware of any new errors.

The Supreme Court in its ruling, Monday directed the EC to extend its nomination period by a day to allow all the 12 aspirants who have been disqualified on the basis of errors on their nominations to correct all those anomalies.
The PPP candidate like the 11 other candidates had infractions on their forms for which reason they were disqualified.

The infractions, according to the EC, ranged from acts of fraud, registration irregularities and recklessness on the part of the aspirants and their endorsers.

For the PPP flagbearer he was disqualified because one of his endorsers, Richard Aseda was deemed to have endorsed the candidate in the Central Region, as well as in the Volta Region, contrary to the election regulation which allowed the endorser the right to endorse in only one district.

Even though the PPP conceded to committing the error, the party vehemently disagreed with the EC’s decision to disqualify its presidential candidate and therefore proceeded to court to have the decision set aside.

But the Supreme Court again disagreed with the EC. The seven member panel in a unanimous decision directed the EC to allow the candidates to correct all the anomalies raised by the EC on their nomination forms and also gave further directives. That the EC must extend the nomination period by one more day.

With a 24 hour deadline to meet, the PPP proceeded to the EC in the hope of correcting the single error that was brought to their attention but the party is claiming a mountain of errors have been identified by the EC to which they have to correct before Tuesday, 5:00 pm. 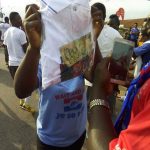