Veteran politician and business consultant, Dr. Papa Kwesi Nduom says he did not venture into politics with the single objective of enriching himself.

According to him, the decision to enter into politics is inspired by the motivation to serve the nation.

The crave to occupy a political office in the country has become for many, the plain sailing for acquiring wealth and making a good living.

But that desire can only “get you hungry”, the torchbearer for the Progressive People’s Party (PPP), an offshoot of the Convention People’s Party (CPP), stated on the Super Morning Show on Joy FM, Tuesday, August 22, 2017.

The business consultant who owns chains of businesses operating under the Group Nduom brand stated he is not into politics to make money.

The former Member of Parliament for the Komenda-Edina-Eguafo-Abirem constituency of the Central Region was emphatic: “Politics cannot make one pesewa for me” reiterating that politics for him is for “public service”.

He told Nhyira Addo, host of the programme before deciding to do politics, his preoccupation was to “take care of business first” and feeling satisfied after, he offered himself up for public service through politics.

He observed that “right now in Ghana politics is number one” therefore, his call for those with that kind of mentality to “remove that from our table”.

His counsel for up and coming politicians is to ensure they first achieve success in life so that they do not have to ‘beg’ to make a living when they are out of government.

“You can get hungry [and] I don’t want to be a hungry desperate person…That [politics] is something that you do when you’ve accomplished something,” the former minister in the J.A Kufuor government said. 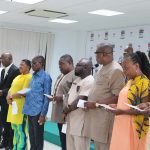