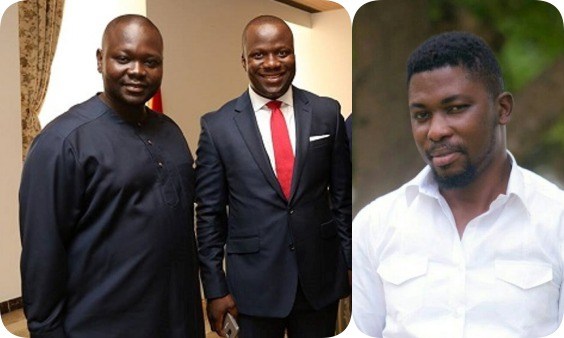 Exactly a week after the Criminal Investigations Department (CID) of the Ghana Police Service cleared the two Deputy Chiefs of Staff, Samuel Abu Jinapor and Francis Asenso Boakye of corruption allegation leveled against them, Kasapafmonline.com can authoritatively state that the police report was massaged.

This website is in possession of an audio recording which is a conversation between Musician, A Plus who’s the accuser of the two senior government officials and a senior female police officer, in which the latter actually confirmed that her outfit’s investigation points to the fact that the two Deputy Chiefs of Staff probably engaged in corruption.

Kwame Asare Obeng popularly called A Plus, who is also a member of the governing New Patriotic Party had accused the two Deputy Chiefs of Staff of bribery and corruption.

On social media, the musician claimed the two had received bribes and subjected them to insults but later apologized for the insults.

President Nana Akufo-Addo who had vowed to subject all his appointees to strict corruption investigations instructed the police CID to investigate the allegations levelled against the two Deputy Chiefs of Staff.

But a statement signed by COP Bright Oduro, Director General of CID of the Ghana Police Service described as baseless and unsubstantiated allegations of thievery and corruption leveled against the duo, adding that their intervention in a Korle Bu Teaching Hospital deal “was transparent, borne out of the protection of public interest and consistent with their duties as Chiefs of Staff.”

But fresh information gathered by Kasapafmonline.com indicates that the police report was geared towards white washing messers Abu Jinapor and Asenso Boakye.

In the said tape, the senior Police officer is heard telling A Plus that “as for the corruption aspect of it, from what you said and what we’ve gone to confirm, you wouldn’t be too far from right to say that this is what happened, but we need to manage… the people are your people. We need to find the best way to ensure that Korle Bu works the way we all want it to work.”

The Police Officer who sounded very emotional and more of a politician than a security officer is further heard saying, “you need somebody who’ll be neutral to tell them exactly what is there for them to understand and I wish I could have an audience with the President himself. Because it looks like most of the things doesn’t get to him…yes I feel sad for him.”

The senior police officer, added “I feel he has good intentions but he’s not going to achieve it.”