The police in Takoradi have commenced investigations to ascertain how three children were burnt to death at Bidifuom, a suburb of the Takoradi Market Circle in the Western Region.

According to the Takoradi District Police Commander, Superintendent Peter Ofori Donkor, the police investigation will be hinged on information made available to it by the Ghana National Fire Service, which has to first confirm the cause of the fire.

Narrating the incident to Citi News, Supt. Ofori Donkor said “at about 2:30am, the police had reports that there was fire outbreak at the Takoradi Market Circle at a place called Bidifuom. Police moved to the scene and it was observed that a kiosk was totally destroyed by fire. Three children were burnt to death in the process and their bodies have since been sent to the Effia Nkwanta Regional Hospital for autopsy.”

The tragic death of the two girls and the boy aged between one and three years, broke at the time when the Bidifoum part of the Takoradi Market Circle, was full of merry makers in the heat of the West Side Carnival celebrations.

While some residents alleged that the mother of the children had locked the kiosk in which the three children were sleeping with a candle to join the merry makers, others suspect arson by the father of one of the kids, who is alleged to have been at loggerheads with the mother.

This year’s Christmas celebrations in the Western Region has recorded another unfortunate incident following the death of Bright Larbo, a 22 year old Takoradi Polytechnic student, and Nasiru Amoah, a 24 year old welder who drowned at the Albert Bosomtwe Sam fishing Harbor on Christmas day. 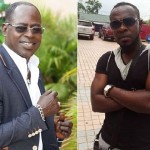