The Ghana Police Service has arrested five persons in connection with the attack on the Upper West Regional office of the National Disaster Management Organization (NADMO).
A group, reported to be members of the ruling New Patriotic Party (NPP), besieged the NADMO office in the Upper West region on Wednesday and caused mayhem.

The group chased out the Regional Director of NADMO, Isaac Seidu, before brutally assaulting his personal aide.

The Regional Minister, Alhassan Suleiman, reportedly prevented the Police from arresting the perpetrators due to their affiliation with the ruling NPP.

However, the Upper West Regional Police Command has now picked up five persons who were involved in the attack.

Accra-based City FM reports that the arrested persons include Bongaawmini Issahaku, Abdullah Hakim, Nuhu Suglo,Seidu Salifu and Osman Kamal, who is reported to be the leader of the group.

He added that the Police is still working around the clock to arrest the other perpetrators involved in the attack of the Upper West Regional NADMO office.

Play Video
Meanwhile, the Upper West Regional Minister, Alhassan Suleiman, has been suspended by President Akufo-Addo for his conduct during the whole situation.

A statement issued by the Director of Communications, Eugene Arhin stated that “the President of the Republic, Nana Addo Dankwa Akufo-Addo, has suspended, with immediate effect, from office, the Minister for the Upper West Region, Alhaji Sulemana Alhassan, pending the outcome of the investigation into the unfortunate incidents that occurred at the premises of the Upper West Regional office of the National Disaster Management Organisation (NADMO), in Wa, on Wednesday, 31st January, 2018.”

This followed a massive strike by workers of NADMO on Thursday, after which they demanded that until the suspects are arrested, they will not return to work. 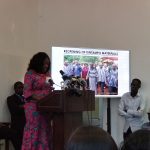