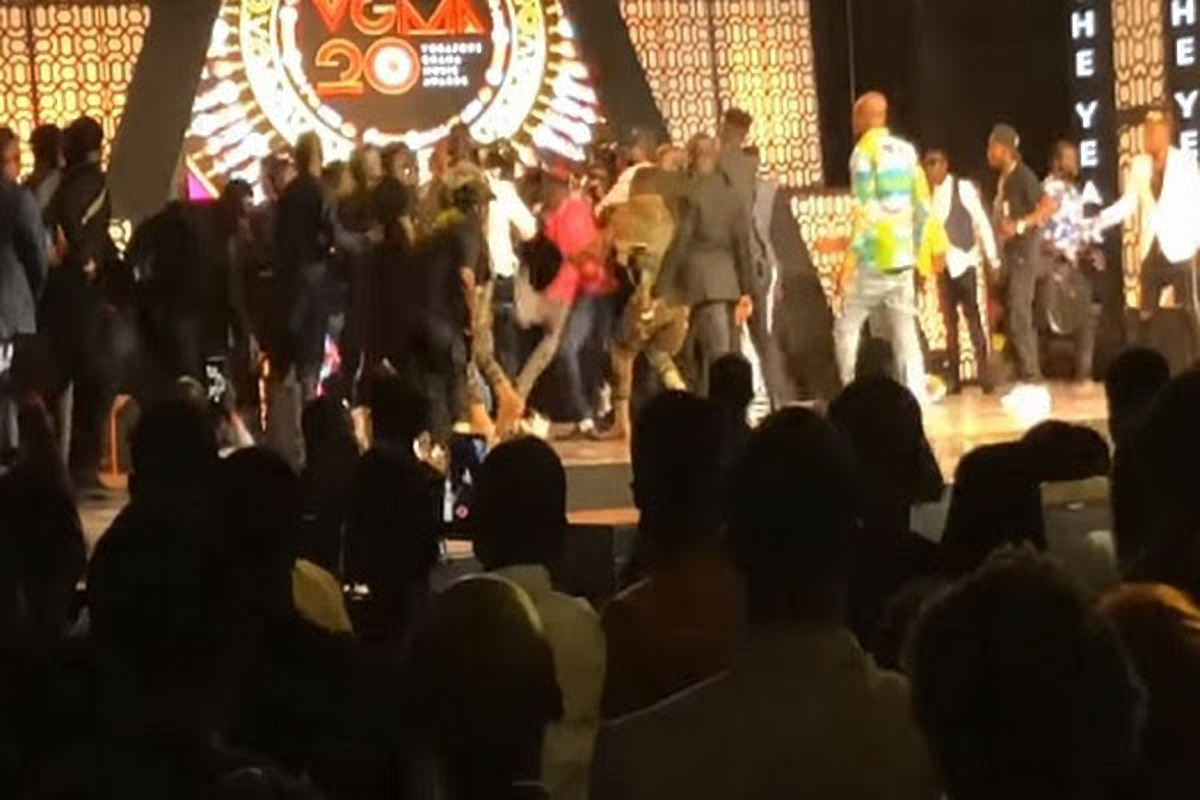 The Accra Regional Police Command are searching for the person who was seen in a viral video handing over a pistol to Stonebwoy during his brawl with Shatta Wale at the Vodafone Ghana Music Awards last Saturday.
The young man, whose identity is currently unknown, is suspected to be one of Stonebwoy’s team members and also acts as his bodyguard.

In the video, the unidentified man is captured pulling out the weapon from what is believed to be a bag and passing it on to Stonebwoy in the midst of the confusion.

In addition to pursuing the unidentified man, the police have also asked Stonebwoy to produce the weapon which was seen in the video.

Also, some team members of Charles Nii Armah Mensah, who goes by the showbiz name Shatta Wale, who were seen heckling some members of Stonebwoy’s team on stage during the confusion are also being pursued by the police for arrest.

Speaking to the Daily Graphic, the Commander of the Operations Unit of the Accra Regional Police Command, Assistant Commissioner of Police (ACP) Mr Kwesi Ofori, said a team of policemen had been dispatched to search the homes of Stonebwoy and Shatta Wale.

Stonebwoy was involved in a brawl with his rival Shatta Wale.

The brawl occurred when Stonebwoy went on stage to receive his award for Reggae/Dancehall Artiste of the Year and Shatta Wale and his team tried to get up on stage.

They were prevented by Stonebwoy’s team which led to a free for all fight and even saw Stonebwoy wield a gun on the stage. This also delayed the programme, which had been going okay for some minutes to ensure calm was restored.

Although full details are yet to emerge, some say Shatta Wale wanted to congratulate Stonebwoy for the award while some say he wanted to go on stage to protest his rival’s win.

Subsequently, the police invited Shatta Wale and Stonebwoy and the officials of Charterhouse, the organisers of the 2019 VGMA, to assist with investigations into the disturbance that rocked the event.

After taking statements from the invited parties, the police detained Shatta Wale and Stonebwoy.

The two had been granted police enquiry bail as of press time yesterday.

A press statement signed by the Public Relations officer of the Accra Regional Police Command, Deputy Superintendent of Police (DSP) Mrs Effia Tenge, said the police, in no uncertain terms, condemned the disturbance that characterised the 2019 VGMA.

It said preliminary investigations conducted so far had established that the disturbance started after Stonebwoy had been declared Dancehall Artiste of the Year and had mounted the stage to receive his award.

At that moment, Shatta Wale moved to the stage uninvited, provoking a scuffle between their fans.

The statement also indicated that another person, identified as Nii Amoo, who was seen discharging pepper spray in the hall and was arrested was also in police custody.

It said the event organisers and all suspects arrested so far were cooperating with the police and hinted that anyone found culpable would be put before court in due time.

“The police will not condone acts of lawlessness,” it said, and assured the public and the fans of the two artistes that the case would be handled with the “needed attention it deserves”.