The Police have been accused of cooking up intelligence to found a baseless for an injunction against a picket by Let My Vote Count Alliance who are demanding a new voters register.

A Ranking member of Interior and Defense Committee of Parliament, Major Derick Oduro says the police’s claims were “very clearly cooked” after the Police High command revealed that it is has uncovered a plot by some “hardened criminals” to unleash a planned attack, rob and cause panic within Accra and across the country.

The command claims the hardened criminals have planned to attack police officers on essential duty across the country.

A Circuit Court in Accra only hours ago said there was no longer a restraining order stopping the Let My Vote Count Alliance (LMVCA) protesters from picketing at the vicinity of the Electoral Commission (EC) as planned on September 29, 2015.

The police had been arguing that the EC is a security zone and should remain inaccessible to the protesters for their picketing.

But in a move branded by a lawyer Samson Lardy Anyenini as mischief and an abuse of the process, the Police went to a different Circuit Court to offer another set of reasons for an injunction.

The police now believe the planned coordinated nationwide attack on the police has already been activated leading to an incident in Ho in the Volta region where an officer was shot and killed by unidentified armed men.

In the end they managed to convince the Accra Circuit Court to stop the Let My Vote Count Alliance protest at the Electoral Commission headquarters Tuesday to demand a new voter’s register.

The disclosure by the Police scuttles excitement by the organizers of the picket who were hoping to stage a repeat of their demonstration to pile pressure on the Electoral Commission.

Derick Oduro, however, condemned that move by the police and rejected attempts to link a fatal attack on a police officer at Ho.

The Ho fatality “clearly has nothing to do with the issue in Accra” he said insisting it is “an orchestrated event”.

The relationship between the LMVCA and the police broke down over two weeks ago after the first demonstration turned violent.

Several protesters were beaten and others arrested by the Police for allegedly using unapproved routes in their march to demand a new electoral roll.

The police fired tear gas and beat protesters with horse whips in attempts to cow them into submission.

A leading member of the opposition New Patriotic Party, Gabby Asare Otchere-Darko was beaten with baton and horse whips. 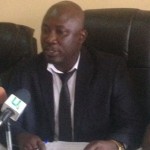