The Brong Ahafo Youth Organizer of the ruling New Patriotic Party (NPP), Kwame Baffoe popularly known as Abronye DC, has sent Kwame A Plus a musician associated to the party, to the cleaners.

Abronye DC described A Plus as a “bloody fool and a greedy” individual who is acting out because he was refused a contract.

Speaking to Kwame Tutu on Rainbow Radio 87.5 FM, the maverick politician said, A Plus has benefited than any NPP official since the party won power.’’

He said, his [A-Plus] contract at BOST, fetches him GHC3 million a month.

According to him, the musician insulted and accused the two Deputy Chief of Staff because they refused to abrogate someone’s contract and give it to him.

The musician who was critical of the former NDC administration, described Mr. Asenso, a Deputy Chief of Staff as stupid and a corrupt person.

A Plus while commenting on Facebook on President Akufo-Addo’s achievement so far said some of his officials are very “corrupt.”

He in the post also took on Mr. Asenso-Boakye and Abu Jinapor describing them as not only corrupt but “stupid” although he failed to list their crimes.

“…Seven months of NPP government. So far so good except appointing some very corrupt official including the two very stupid deputy chief of staff. It’s amazing how Nana was able to appoint two thieves whose level of stupidity is the same. Arrogant and corrupt fools. You think you’ll be in power forever. Even John Mahama I was not afraid of him then you (sic),” A-Plus stated.

But commenting on the allegation, Abronye DC challenged A-Plus to provide concrete evidence and stop being petty. He said the allegations would not be tolerated from any member of the party.

‘’You went to the Deputy Chief of Staff asking him to abrogate someone’s contract because you claim he was NDC and after you were refused, you go about attacking and slamming people. He is now wealthy and so he is misbehaving himself. He is a bloody fool. Who was he? He was nobody but has now benefited from the NPP than any party member. If he opens his mouth wide, I will open my mouth wider,’’ he added. 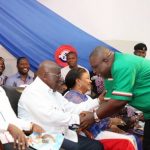