Controversial prophet and founder of the Glorious Word and Power Ministries has revealed on Rainbow Radio 87.5Fm that, plans are underway by some persons to assassinate a flagbearer of a leading political party in the country.

Rev. Isaac Owusu Bempah in an interview with Kwame Tutu said, God has revealed to him that, a presidential candidate is about to be assassinated and so he had informed the political party about the revelation.

He added that, he has informed the political party to adopt very strict security measures in protecting the life of that presidential candidate he failed to mention.

“I have sent some men to go and inform that presidential candidate and his party to be cautious because, plans are underway to kill him. He should be careful when driving. His security should not be joked with. Some evil men are plotting to kill that flagbearer and if that happens, it will not augur well for the country.”

Rev. Isaac Owusu Bempah has also predicted victory for the opposition New Patriotic Party (NPP), but has warned them to be vigilant to prevent another Supreme Court case.

He posited that, plans by the NDC to rig the election are fast advancing. However, it will not work. Commenting on the revelation by his colleague Prophet Badu Kobi that Nana Addo will lose the election if he fails to purge himself, Rev. Bempah said, Nana Addo is winning the polls because he has purged himself as advised 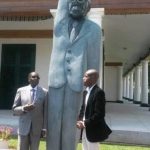