President John Mahama, has assured the people of the Eastern region that plans to build the University of Environment and Sustainable Development is on course.

He said the Parliamentary Committee on Education and Health has completed work on a fifty million dollar facility to augment the existing funds for the construction of the University.

The President announced this when he joined the Chiefs and people of Lower Manya to celebrate their Nmayem festival.

President Mahama, commended the Chiefs for maintaining the peace in the area. He said indeed they have shown that peace goes hand in hand with development.

President Mahama stated that the festival should be used as a moment for the Chiefs and traditional leaders to renew their commitment towards a united front.

The people of Somanya are facing water challenges as a result of an anomaly in the water distribution system from Koforidua.

President Mahama said the problem is being rectified and soon water will be extended to some 21 communities.

Three hundred youth in the district have been drafted into different modules under the youth employment agencies and some thousand people have been given soft loans to expand their businesses. 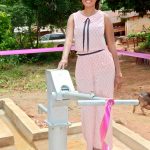