It’s no secret that the Akufo-Addo government is experiencing serious turbulence. Many voters are convinced that what they are getting isn’t the one they were promised. To cover their shame and super incompetence, Akufo-Addo and his ministers have resorted to casting aspersions on John Mahama and the ministers who worked under him, deliberately discrediting the monumental achievements and the innovative measures they adopted to tackle decades old problems they inherited. Former President Mahama and his appointees served Ghanaians diligently and to the best of their ability. The result of their sweat is what the Akufo-Addo government is enjoying. The easiest way to attract the attention of the President is to insult the former President, his appointees and party (NDC) leaders. One would have thought that the excruciating damage inflicted on the Akufo-Addo government by Peter Amewu would have humbled him. But the truth is that spoiled and over pampered children do not know what it takes to have self-discipline and respect for others. They see everybody as ice-cream, Tom-Tom , yoghurt and indomine noodles. Hence they can abuse anybody not minding the gap.

Peter Amewu, responding to the wise counsel the former President offered the current administration on how to fight the galamsey menace, lied to the public that the former President in office, didn’t put together a single policy document to guide the fight against galamsey. The Minister’s pronouncement exposed his ignorance and the fact that he is not on top of the job he has been assigned by the President to execute. My reasons are as follows

1. The Minerals and Mining (Amendment) Act was passed by the Parliament of Ghana under John Mahama. The primary aim of that Act is to sanitise the mining sector. The amendment law further reiterates Prohibition of every form of illegal small scale mining and criminalises mining by both foreigners and Ghanaians without a licence. The law also mandates the judiciary to confiscate the equipment and tools used in illegal mining as well as the product of the menace. The new law also criminalises the engagement of foreigners in small scale mining operations and also makes it an offence for a Ghanaian to employ or engage a foreigner to undertake or participate in illegal small scale mining activities.

Some foreigners who were caught engaging in illegal mining were deported. Government seized their equipments.

President Mahama and his administration took into consideration the importance of small scale mining in the country and the number of Ghanaians the sector employs and decided to design a more scientific policy to regulate their operations to keep them in the business whilst their negative activities are checked. The administration also designed a comprehensive policy to find alternative jobs for those who may be displaced as a result of the new policy. The YES initiative and other skill training initiatives were introduced by the administration to help all displaced persons acquire new skill to make them employable and establish their private businesses.

3. The world bank and Chinese Technology after intensive discussion with government, decided to partner the country to embark on a reclamation project to reclaim the dangerously abandoned pits.

4.The former President has not changed position with regard to how small scale mining (galamsey) should be handled. He only reiterated the position he espoused in office. He told chiefs in the mining communities, experts in the industry etc that he focus was on how to find alternative jobs for our young folks engaged in the galamsey activity and how to regulate activities of those in the business to check negative practices and generate revenue for reclamation projects.

Up until the 1980s, small scale mining activities in Ghana remained largely unregulated and received little support from governmental bodies. This phenomenon changed with the implementation of the national economic recovery plan (ERP), which, following intensive consultation and planning, was finally launched in the mid 1980s. This information is captured in ( Hilson,2001). The Rawlings administration realising the wastage of nonrenewable resources and the hazardous effect on human and environmental health, promulgated laws to regulate small scale mining activities.

Let me furnish the Minister with this import information. It was the PNDC administration that defined the meaning of small scale mining in Ghana. And was defined as “any method not involving substantial expenditure by an individual or a group of persons not exceeding nine in number or by a corporate society made up of 10 or more persons (PNDC Law,218,1989)

In Ghana, one formidable challenge that undermines the implementation of small scale mining is illegal mining..known in our local parlance as galamsey. It is incapable of meeting legal requirements and regulations designed for medium or large scale mining sector. This informed the former President’s decision in office, to tackle the issue from the angle he proposed before his exit. 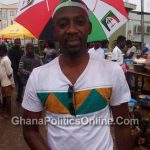