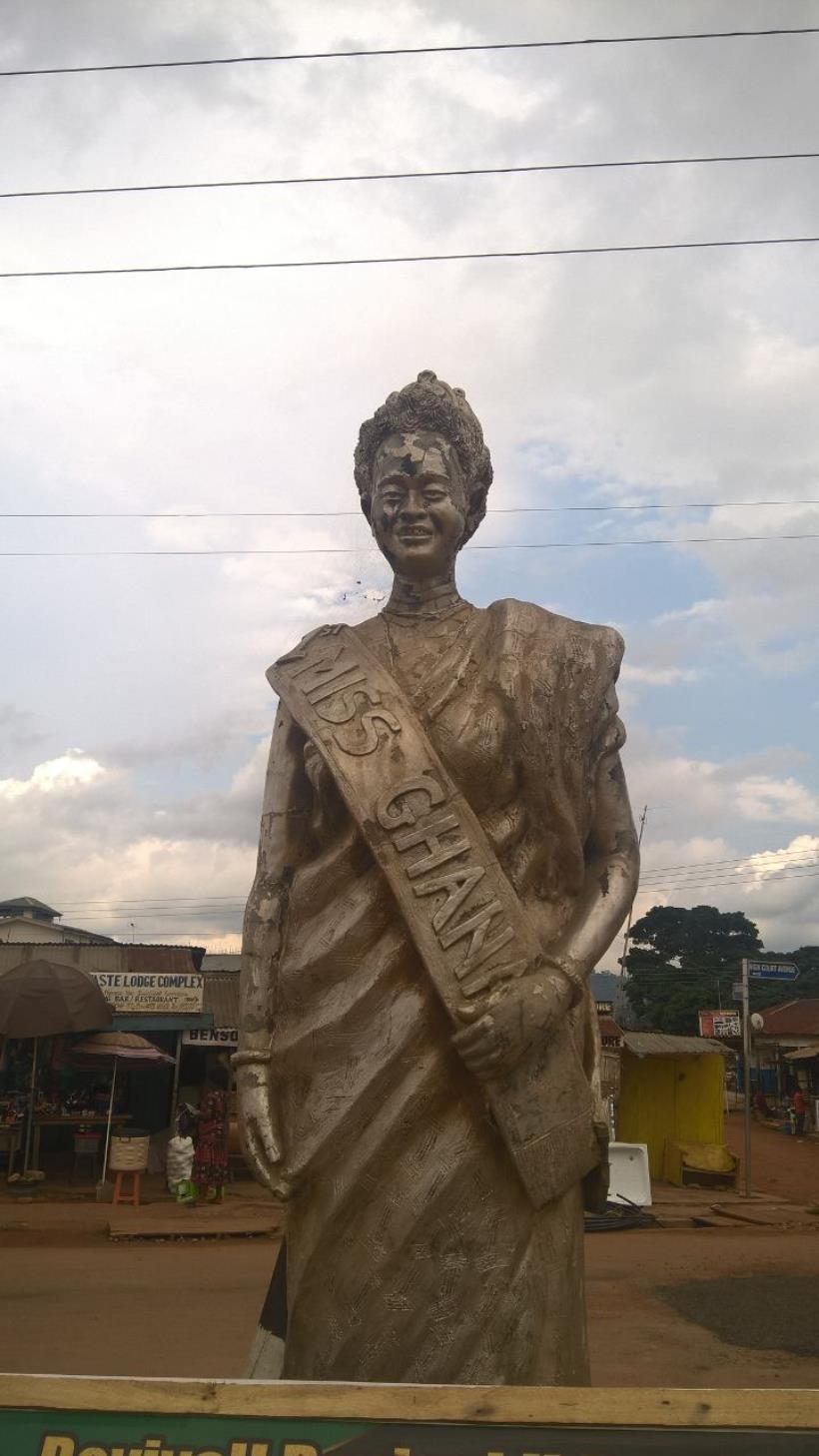 The Ashantis go by the accolade Kotoko (the porcupine). They gained this accolade due to their military power and effective strategy in fighting wars since 1701. Their assertive claim that if a thousand Ashantis are annihilated in war, a thousand more will come to replace those decapitated (wokum apem a, apem beba), likened the Ashantis to the porcupine which releases its sharp long quills or spines and gets replacement almost immediately. Interestingly the Nzimas also call themselves Kotoko but the reason behind it may probably not be the same as that for the Ashantis.

This article will discuss why Voltarians are called “Number 9”.

At independence, Ghana was divided into seven administrative regions: Ashanti, Central, Eastern, Northern, Upper, Volta and Western. Brong Ahafo was the first region created after independence. It was carved out of the Ashanti Region in 1958. Anyone who went to school in the 60s and 70s will remember that Ghana had only eight regions. Yet Volta Region, which had existed since independence, was called “Number 9”. PNDCL 26 created Greater-Accra as a region on its own on 23rd July 1982. Greater-Accra, became the ninth region of Ghana. Yet the Volta Region retained its nickname of “Number 9”.

The youngest regions in Ghana are the Upper-West and Upper East which were created when the then Upper Region, was divided into two by the PNDC government in 1983. Of course, the Volta Region continued to be called “Number 9”.

When Brong-Ahafo Region was created in 1958, it left the Ashanti Region completely “landlocked” within Ghana. The region has no borders with the outside world. Some observers say it was a deliberate ploy by Kwame Nkrumah to make it impossible for the Ashanti State, the heartland of the “matemeho” movement and congenital opponents of the CPP, from ever seceding from Ghana. When Greater-Accra region was created, it left the Eastern Region also “landlocked” within Ghana as it lost its sea border. It is, thus, only the Ashanti and Eastern Regions that share no borders with the outside world.

But how and why did the Volta Region get the nickname by which some people still call it? The well-known fact must again be stated that the nickname “Number 9” is almost always used in a derogatory sense even if it is often said more as a joke than as a serious insult. The people of the region do not call themselves that and it is obvious they do not quite take much delight in being called so

The derogatory connotation of the Volta nickname may come from its carrying a certain sense of “lateness”. This sense is reinforced by the fact that the region is made largely (but not completely) of the erstwhile Trans-Volta Togoland (TVT) which, until December 1956, was really not an integral part of the Gold Coast. Of the four entities that constituted modern Ghana, the TVT was the last to be formally joined to the Gold Coast (that became Ghana) even though the territory had long been administered by the British from their Accra seat as part of their Gold Coast “possession”.

It wouldn’t matter if the lateness denoted just that – lateness. But “Number 9” carries a sense of backwardness even though the region doesn’t come last on a range of important metrics. It is not the last region to be created, it is not the smallest region, it does not have the smallest population, and it does not have the lowest literacy rate. It does not come last in an alphabetic ordering of the regions of the county. Yet the nickname persists.

A second reason one can hear for the “Number 9” is that, until new codes were introduced in 2010, Volta Region’s code was 09. If you lived outside the region, you dialled 09 to get to the region. But this reason does not seem true. In the 60s, not many people had access to telephones and it is unlikely the region could be identified by its telephone code. Moreover, it is a bit difficult to assign a derogatory connotation to a region because of its telephone code number.

How did the “Number 9” come about? The reason is actually simple and one which, at a time, the people of the region would have been proud of. The first ever Miss Ghana competition was held on 4th March 1957, two days before our independence. It may have been conducted as part of our independence anniversary activities. The candidate representing the TVT (Volta Region?), which had by then become an integral part of the new nation, had the identification number 9. Miss Monica Amekoafia, then 22 years old from Alavanyo in the Volta Region, and representing her region carrying lap number 9, went on to win the entire competition and was crowned as the first ever Miss Ghana. Ghana did not have television then (it wouldn’t come until 1964) and only those present at the function or listening to the radio (if it was broadcast live), would have seen or heard the announcers calling the Volta Region candidate by her lap number. The following day, the newspapers may have carried pictures of the candidates and their regions and their lap numbers.

People may have talked about the contest for days even as they still do today for “Ghana’s Most Beautiful”. Volta Region became identified with “Number 9”. If Ghanaians welcomed the TVT as part of Ghana, there might have been a lot of goodwill around. It was a time we all identified ourselves as Ghanaians. The tribalism we see today was virtually non-existent then. Those who then called Volta Region “Number 9” wouldn’t have done so for any diabolical reasons. That would come later on…

If you look at the map of the erstwhile TVT, you will notice that its southern border is a straight line just below Ho. This is one more evidence of the saying that in the scramble for Africa, the colonial powers used “ruler and pencil” to carve out Africa among themselves. The borders of the erstwhile TVT cut the Ewes in two “by heart”. That was why areas like Peki, Tsibu and even Kpeve, whose Ewe likens that of the “northern Ewes” found themselves in the Gold Coast whereas nearby Ho found itself in German Togoland.

German Togoland included the whole of Togo and the erstwhile TVT. The Germans colonized it for some 25 years until the First World War when the British and the French pushed them out of the area as part of their war effort. They then divided the area between themselves. The British administered their part from the Gold Coast.

After the Second World War, the UN mandated the area as a trust territory for the British to look over. They called it Trans Volta Togoland and added it to the Gold Coast, though as a separate entity. When Gold Coast independence was imminent, the British informed the UN they would not be able to continue administering the territory after Gold Coast became free. It was then that the controversial plebiscite was held and the people of the TVT voted to become part of the Gold Coast and formally did so in December 1956 in time for independence in March 1957. The French, however, continued to administer the French Togoland until they were forced to grant it independence in 1960.

Number 9 has been repeated by Ghanaians till today to refer to Voltarians in a derisive and derogatory manner. Those who say it, see Voltarians as backward and the 9th and last region of Ghana. It is often said that when a lie is repeated continuously it gains an element of truth. People have either refused or are unwilling to accept or learn the history of “Number 9”. The Bible states that for lack of knowledge my people perish.

Today, there is a poorly maintained statue of Miss Monica Amekoafia (now deceased) in front of the Post Office in Hohoe in the Volta Region. It commemorates her victory in the beauty pageant of 1957. I wonder how many of Hohoe’s citizens who pass by this statue every day know that it is the young lady’s victory in the year of our independence that is the cause of their region being called “Number 9”.