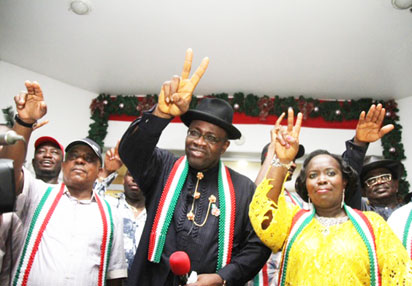 LAGOS — Serving and former elected office holders on the platform of the Peoples Democratic Party, PDP, weekend, adopted resolutions to retool the former ruling party, including a decision to jettison the principle of zoning in the election of a new national chairman.

In its stead, the PDP bigwigs, including governors, senators, lawmakers and former ministers, at the end of a meeting in Lagos resolved that the principle of zoning would be adopted only after a formidable new national chairman with weight and integrity has emerged.

The PDP stakeholders met at the Eko Hotel and Suites in Lagos at the meeting that was hosted by the Deputy President of the Senate, Senator Ike Ekweremadu and had Senator Biodun Olujimi as MC.

Senator Ekweremadu is the highest elected office holder on the platform of the party.

The meeting, Vanguard gathered, was essentially meant to frame strategies on how to push forward the party and also respond to the perceived actions of the APC which party stalwarts alleged to be acts of persecution.

At the end of the meeting, the governors, lawmakers and former ministers resolved to form a committee to search for a credible person to lead the party as national chairman from any part of the country.

The party stalwarts, it was learned, said the zoning of party positions at the forthcoming national convention would be hinged on where the person chosen as national chairman comes from.

“What we decided was to establish a committee to search for a formidable and credible national chairman following which all other national offices would be zoned,” a participant at the meeting said.

The committee so formed, it was gathered, would work with the Governor Olusegun Mimiko-led PDP Governors Forum on the choice.

Besides, the meeting also decided to constitute a committee that will help prepare the party to respond to what party stakeholders at the meeting described as the persecutions from the APC-led government.

All the party caucuses were present at the meeting. Ekweremadu led the PDP senators to the meeting, while Rep. Leo Ogor led the House of Representatives caucus and Governor Olusegun Mimiko led the PDP governors including Governors Ayo Fayose of Ekiti State, Dairus Ishaku of Taraba, Ibrahim Damkwambo of Gombe, Deputy Governor of Delta State, Kingsley Otaru, among others.

The stakeholders were pleased with the presence of former governor of Cross River State, Mr. Donald Duke, who was making a presence at a national PDP stakeholders meeting for the first time in about eight years.

Meanwhile, the PDP national leadership yesterday said that the alleged persecutions of the APC led administration were making the party to become stronger.

The party said that APC having realized that it lacked what it takes to deliver its campaign promises to Nigerians has resorted to intimidation and harassment of the opposition through a witch-hunt policy.

National Secretary of PDP, Prof. Adewale Oladipo said in a statement on Sunday that in “a desperate mood to cover up its obvious lapses and the clear lack of governance direction in the last eight months, the APC administration has plunged all its energy seeking imaginary PDP faults.

“In all democracies, viable opposition is recommended for stability and growth of society, but the APC in is seeking to decimate opposition so foist its dictatorial agenda of installing one party state without economic direction and where the rights of the citizens are trampled under-foot.

“Nigerians have seen through the campaign deceptions and the now unfolding agenda of the APC and are now apprehensive about the health of the country as the reality of the type of party and leaders they voted into power gradually dawns on them.

“They have watched carefully as all essential values of a viable democracy are being destroyed; the other arms of government, the judiciary and legislature have been caged under with each now struggling to survive.

“We are all witnesses of the brazen abuse of human rights of citizens, arrest and detention without trial, disregard for court orders and the impunity being displayed by various security agencies in the last eight months.

“Also obvious to Nigerians now is the use of the fight against corruption as means of settling scores with perceived enemies as is the case with key PDP leaders including its Spokesman, an action that is ostensibly aimed at silencing the opposition from looking in and exposing the incompetence, and the double standard of the administration.

“We invite Nigerians and the international community to continue to note that while the government continues to harass PDP leaders and abuse their rights, very obvious corrupt cases involving notable APC leaders have been brushed aside.”

“The PDP however reiterates its support for the fight against corruption but insists that its conduct must have integrity, must be fair, credible, just and must follow due process and rule of law.

“Finally, the PDP assures its numerous supporters across the country of the dividends of the on-going rebuilding and re-engineering process in the party to re-position the party for the electoral challenges ahead especially as it has become clear that APC lacks the capacity to handle governance and provide economic direction for the country, but has only succeeded in injecting bad blood and division among Nigerians resulting in the current threats to national cohesion and stability.