Political parties contesting this year’s Parliamentary election have voted for positions on the ballot papers.
At a balloting session at the Electoral Commission (EC) headquarters in Accra on Thursday morning, the Great Consolidated Popular Party (GCPP) chose the first position followed by the Progressive People’s Party (PPP) at second and the National Democratic Congress (NDC) at third position.

The Peoples National Convention (PNC) and the Convention Peoples Party (CPP) were not present at the balloting.

The EC invited all the parties for Thursday morning’s decision on how Parliamentary candidates were to be positioned on the ballot paper for Election 2016.

The EC explained that, parties who were absent for the balloting will be allocated their positions in the order of their time of filing for the presidential nominations.

Balloting for independent parliamentary candidates are to be done at the various district offices.

The ballot for positions on the presidential ballot paper has however been suspended until the court cases filed by some disqualified presidential aspirants have been dealt with, Mr Eric Dzakpasu, Head of Communications at the EC has said.

This is the first time the EC has had to ballot for parliamentary positions on the ballot paper.

In previous elections, the balloting was done for presidential candidates.

The positions of the presidential candidates were replicated for parliamentary candidates from their various political parties.

The EC has been embroiled in suits following its disqualification of 12 presidential aspirants after they had filed their nominations with the electoral body.

Several reasons were cited by the EC Chair, Mrs Charlotte Osei, for disqualifying the presidential hopefuls, including the lack of evidence on statutory declaration as to home town or residence in the constituency as per the legal requirements and the use of the same subscribers by various candidates.

The EC also said for a large majority of subscribers, the signature portion was ticked, instead of being subscribed with a signature, thumb print or mark.

The parties that are challenging the disqualification of their presidential aspirants include the Progressive People’s Party (PPP) and the National Democratic Party (NDP), while the People’s National Convention (PNC) and the All People’s Congress (APC) have threatened to sue the EC if their disqualification is not revoked. 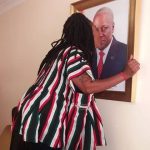