Prices of the commodity on the world market has tumbled to under 40 dollars a barrel but new levies imposed by the Finance Ministry have forced petroleum prices at the pump to rise sharply.

In an apparent defiance for increasing demands for a repeal of the law in which critics have called killer levies and taxes on petroleum products at the pump, Mr. Ato Forson said it is in the best interest of Ghana to maintain the new prices.

Speaking to Citi News the Deputy Minister added that the current prices at the pump reflects what the Finance Ministry intended and that MPs had been properly briefed prior to the levies being approved.

According to him, when the Minister of Finance appeared before the Parliamentary Select Committee, he was asked about the impact of the levy on Ghanaians after which he gave a vivid explanation to them.

Government has been accused of deceiving Parliament which approved 2.9% and 5% increase in prices of fuel but the price at the pump has taken a sharp rise between 22% and 27%.

Mr. Ato Forson refuted claims that the Ministry deceived Parliament saying; “We did not deceive parliament. Parliament didn’t do a poor job, Parliament did a wonderful job. What Parliament did is to give approval to a law, and it is one of the best laws ever made in this country.” 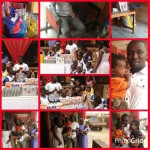