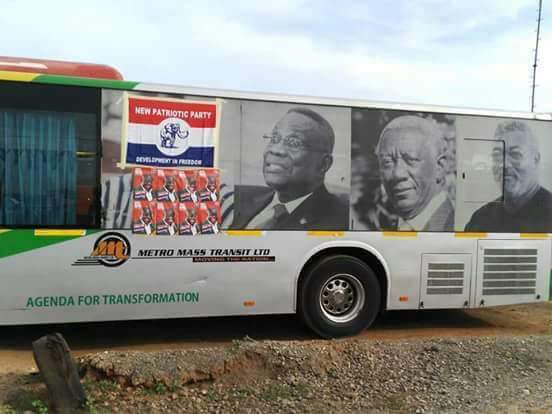 The ruling National Democratic Congress (NDC) has strongly condemned the painting of state buses with colours of the opposition New Patriotic Party (NPP). It said the act further confirms it’s long held believe that the NPP has become the most indiscipline and disorganized party in Ghana since Nana Addo became its flag bearer.

A statement signed by the party’s Tertiary Educational Institutions Network (TEIN) of the University of Professional Studies, said “it has observed with deep concern, the indiscriminate painting of national assets in the capital by the New Patriotic Party.

Below is the full Statement
For immediate release

The Tertiary Educational Institutions Network (TEIN) of the University of Professional Studies, Accra has observed with deep concern, the indiscriminate painting of national assets in the capital by the New Patriotic Party.

We wish to Condemn this shameful and desperate act of indiscipline on the part of the New Patriotic Party.

By this act, it has become evident that the NPP and its leadership have no modicum of respect for Ghanaians and our national assets. Not too long ago, the ‘Let My Vote Count’ movement, a surrogate group of the NPP also embarked on a similar exercise where they painted the walls in the Capital with their unreasonable demand for a new voter register.

It is even more worrying that, hon Akuffo Addo as flagbearer of the NPP has failed to condemn these acts of indiscipline being perpetrated by his party.

The NPP is showing signs of desperation and they have decided to do anything (whether good or bad) to capture power. The lies and the malice doesn’t seem to be working for them so they are now clearly causing destruction to physical properties by painting them with their colors.

We wish to remind the NPP and their desperate flagbearer that, their colours communicates nothing but violence, lies, divisiveness and hopelessness.

The youth of Ghana have kept faith with President John Dramani Mahama and the NDC. We shall continue to work hard to preserve the peace that we enjoy as a country.

The Changing Lives and Transforming Ghana agenda of our Humble , Visionary and Honest President Mahama is on course.

We are confident of a resounding victory for President John Mahama and the NDC.