The governing National Democratic Congress (NDC) says if one analyzes the conduct of the Founder and Leader of Glorious Word International, Rev. Isaac Owusu Bempah, he could be best described as a prophet of doom.

The man of God, according to the Akatamansonians, has said nothing good about Ghana publicly, a situation that makes them believe that he is a false prophet and a “religious lunatic” who needs “psychiatric treatment”.

Rev. Owusu Bempah on Tuesday told Accra-based Okay FM that God has revealed to him that there are some elements in the NDC who are plotting to kill the 2016 presidential candidate of the New Patriotic Party (NPP), Nana Addo-Dankwa Akufo-Addo.

Some stalwarts in the elephant family, especially, those around the flagbearer, he added, are also planning same but warned that whoever tries to do such a thing spiritually, will incur his wrath.

According to him, those plotting Akufo-Addo’s death have tried on several occasions in the spiritual realm to achieve their objective but God has always protected the opposition leader from such trappings.

The running mate of Akufo-Addo, he noted, is also a target.

“There are some people who want to eliminate Nana Addo from this earth. But God has revealed those people to me. I have already spoken to some people to be on the lookout so that whatever vehicle Nana Addo sits in for his campaign will be well protected. The same goes to Alhaji Bawumia”.

“The food and water that Nana Addo will eat should also be placed under a strict watchful eye. Wherever he holds a rally should also be well protected because some people can run into the crowd with a car to kill him. So, his bodyguards should be on the alert”, he warned.

In his view, the upcoming presidential election is not for President Mahama and the NDC sensing danger about defeat are trying all manner of strategies to “kill Nana Addo” so that “they can clinch victory.

Rev. Owusu Bempah also warned that if measures are not place to ensure total security during the Special Voting Day, chaos will befall the country.

But a deputy General Secretary of the NDC, George Lawson in a swift response on the same radio network said Rev. Owusu Bempah is peddling falsehood.

“Why should we call for Nana Addo’s elimination? We believe in every Ghanaian. Democracy is not about killing. If he is a not religious lunatic, he wouldn’t have said this. We are in a democratic dispensation and this does not give you the power or whatever or license to kill. It is not about killing, it is about divergent views. So, if Nana Addo belongs to a different political party and so has a different view that does not mean we should go and kill him. And nobody in his or her right senses will ever do that. And the NDC will never want Nana Addo to die. We believe in divergent views, freedom of expression and we believe in all that. So, these are prophets of doom. Anytime they prophesize it is about doom. Read the Holy Books … is it about doom?” he noted.

He added “We don’t want this country divided. Look at the Special Voting … it is outright lying and we shouldn’t entertain this on our airwaves. What has he prophesized that is good for Ghana? Anytime he prophesies it is doom for this country. We should not entertain this on our airwaves … people who will divide this country. We want people who will unite us. Have you heard the Pope said the world is going to do this or that? By their deeds we shall get to know them. It is God that chooses a King and not Owusu Bempah. God has already blessed His Excellency John Dramani Mahama and so no NDC member will ever have touch Nana Addo. We will pray for the lunatic so that God heals him”. 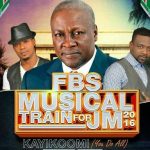