Over 200 members of the ruling NPP at Kwaamo in the Asutifi South District of the Brong Ahafo region have defected to the opposition NDC.

According to the defected NPP members in the farming community, they had been neglected and sidelined by the party, particularly in the mass cocoa spraying programme in the district thus their defection.

“The reason why we have defected to the NDC is about the mass cocoa spraying exercise in the area. The implementation of the mass cocoa spraying exercise was successful under former president Kufuor and John Mahama but under the presidency of Akufo-Addo we feel that we are being cheated thus our defection,” leader of the defected NPP members Kwame Amankwah told Starr News.

In a reaction, however, the DCE for Asutifi South Robert Dwomoh Mensah said the supposed NPP members have always been NDC.

He explained a decision not to engage natives of Kwaamo was taken in the best interest of the program.

“Nobody has said he was defecting to the NDC. I haven’t heard of [that]except few and they are not considered to be NPP Members. We don’t know them. They are known NDC men,” he said.

“We did our investigations and those people were not members of our party,” he told Starr News’ Ibrahim Alhassan. 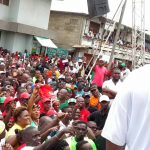