Lagos—Traders from the demolished Owonifari electronic Market, Oshodi yesterday rejected the Lagos State Government’s plans to relocate them to Oshodi Resettlement Market (former Isopakodowo market), citing structural instability and several spiritual activities associated with the structure as their reason for the rejection.

They added that the available space in the market cannot accommodate them.

Meantime, a fire outbreak occurred at  the site of the demolition earlier in the day, stopping the traders from further salvaging any valuable left in the rubble. However, scavengers had a field day.

The refurbished Isopakowodowo Market, where the affected traders were asked to move to was commissioned by the former governor of the state, Babatunde Fashola, now Minister for Works, Power and Housing. It was commissioned two years ago on January 7, 2014.

When Vanguard visited the market yesterday, none of the market stalls had been opened for business since it was commissioned.

Inside the market, officials of the Lagos State Public Works Commissio, LSPWC were sighted rehabilitating the floor.

In an interview with Vanguard, a resident, Mr. Mustapha Adekunle said that the market had never been opened to commercial activities since the former governor commissioned it, saying; “You can see that the entire market is dusty. The government had abandoned the market to rodents.”

A security official, who chose to speak under condition of anonymity, in an interview, confirmed that the market had been under lock since it was commissioned.

His words “I cannot give you my name but all I can tell you is that the state government commenced the renovation works on the market on Wednesday morning after the demolition of Owonifari market. And as you can see, the officials of public works department are rehabilitating the floor.”

Meanwhile, a notice was pasted at the security post for displaced traders of Owonifari and other traders, on the procedures to apply for market stalls.

The procedure reads: “This is to inform the general public/Owonifari electronic traders that all applicants of shops and Klee-Klamps at Isopakodowo electronic market (Oshodi Resettlement Market) should submit their registration forms with allocation letters, Lagos State Resident Registration Agency, LASRRA registration slip and two passport photographs.”

On the features of Isopakodowo, Vanguard gathered that there are 571 shops in the market; established by the previous administration and originally built to accommodate  trader traders dislodged from the rail lines.

Sources said that the market has 64 Closed Circuit Television Camera, CCTV and 22 toilets. And it was expected to serve saw millers and electronic dealers in the state.

It was further gathered that the essence is to attract business to the area and change the face of Oshodi to the mega city standard. He emphasized that the modern market was fully funded by the state government and will be managed and maintained by a facility manager.

Why we shun relocation plans — traders

Mr. Rasaq Adeyemi, one of the affected traders, said the government did not allocate Isopakodowo market to anyone.

His words “No one is interested in the market because of the incident that happened two years ago when a part of the market sunk.

‘’Up till now, we have not heard anything from the state government. Do they want displaced traders of Owonifari to also suffer what happened two years ago. I doubt if the foundation is strong because if it is, that incident shouldn’t have occurred.”

Another trader, Mrs. Halimah Dosu, who had been trading in the demolished market for over 20 years, said she was not ready to go to the new market.

She stated that since it was commissioned, no trader had used it adding that she is scared to move there because of the incident that happened two years ago.

According to her, “People lost their lives. They had families just like we do. If such thing occurs when we move in, what will be the fate of our families? Can the place accommodate us? This week has been bad for every one of us. Most of the traders here are landlords, few are tenants. Everyone is at a loss. We want another place not that market.”

Another trader, Micheal Uzor, said “I am not going to that market. Rather, I will be going to Arena Mall. I believe it can contain all the displaced traders. Also, the it is structurally sound.”

A trader, Mukhtar Atoyibi, said; ‘’As at yesterday people paid N180,000 per annum for a shop  but this morning, it has increased to N300,000 and light is not stable there.

‘’May be we will have to speak with authorities at the market because we don’t have that kind of money to rent a shop. Government did not think well about this before they did it.

‘’They don’t have mercy on the masses. At least if you want to displace people, you have to provide another place. Is this democracy?”

A trader, Uche Chukwuemeka, said;    ‘’Desmond, my co-trader who deals in Video Games, rented a store in the Arena Mall for N1.2 million last week but last Saturday, they refused the N3 million offer.’’

The Public Relations Officer (PRO) of the market, Obinna Nwosu, said that the executives of the market were yet to meet on the State government relocation plans, saying “It is after our meeting that we can decide if we will accept it or not.”

He however lamented that there was no notice, no official letter except oral messages that they were coming.

According to him, “There is a court injunction that the government shouldn’t disturb traders in our market because since its renovation in 1999 where the market got burnt, traders voluntarily re-built the market with N750 million and every shop was decked. Does a seal order look like a quit notice. They assured us everything was going to be settled that was the reason most of us returned our goods.“

When Vanguard visited the market at about 9pm, Wednesday night, scores of scavengers were sighted carting away property of the displaced traders.

Sources said that they sold the undemolished property at give-away prices.

Few hours later, an eyewitness alleged that some policemen who arrived the scene, set fire to the property at the scene.

Another account said that the officials of the Lagos State Government set the property on fire earlier in the day.

A victim, Justus Eze, lamented “I woke with the hope of salvaging my property but when I got here, I discovered that the market was on fire. And even with the fire, I saw scavengers everywhere. I couldn’t believe I was late at 5am. I am hopeless.”

An official of the Lagos State Fire Service, said that the fire was ignited by government officials at the scene to reduce the number of scavengers trooping to the scene to source for goods. 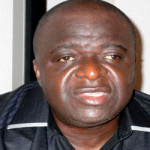