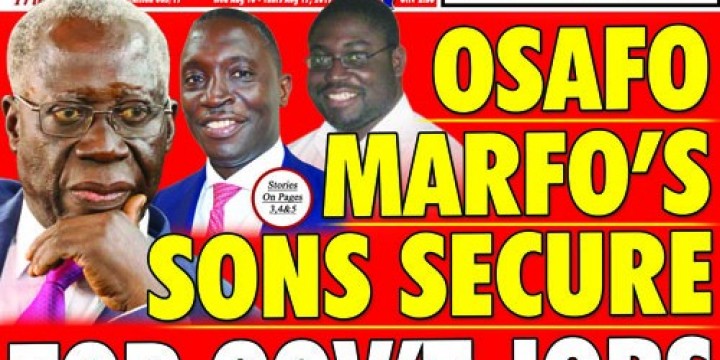 Attend all the schools you can, and obtain all the grades you can, but without an influential father, who is politically connected to place you in the topmost echelon of a state institution, you will end up jobless, poor, wretched and useless.

This is the story of Senior Minister, Yaw Osafo Maafo, who has strategically pushed and placed his two sons at the very top of two different state institutions; Social Security and National Insurance Trust (SSNIT) and National Communications Authority (NCA), since the New Patriotic Party (NPP) and Nana Akufo-Addo, took over the realm of the state.

In one particular instance, the position was specifically created for the Minister’s last son, because ahead of his appointment, there was no such portfolio.

Their senior brother, Yaw Osafo Maafo Junior, opted to operate in the private sector. He is still in the construction business years after leaving Taysec Construction Limited. Daddy is said to be pushing him to take up a public office too, but he is said to have brush aside the suggestion.

Interestingly, their father is in the forefront, pushing for the downsizing of the public sector workforce. He claimed that the Public sector was full and that the Akufo-Addo government, might even be forced to lay off some workers, if the need arises.

Strangely, however, the Senior Minister’s two sons, who were not in the state employment, were placed at top executive positions, whilst insisting that Akufo-Addo government does not have the capacity to employ more public servants, despite job promises to the electorates during the 2016 election campaign.

Many workers employed during the Mills and Mahama administrations, have been sent home under what the same Senior Minister had called a review of their engagement when he appeared before Parliament’s Appointment Committee.

Another bizarre thing about Mr. Osafo Maafo’s two sons are that, while Kofi had returned home abroad after schooling and struggling to find a job, Kwadwo, until the advent of the Akufo-Addo government, was working as a Computer Science Lecturer at the Ashesi University College.

Kwadwo, holds an MSc degree in Computer Science and Engineering from the University of Michigan, USA, but before his appointment, as Deputy Director Cyber Security on August 1, 2017, NCA, had no such department, meaning he is the first head of the new department.

NCA insiders, have no difficulty accepting the appointment of one Edmund Fianko, as Deputy Director, Engineering at the authority, but the creation of Cyber Security Department for Kwadwo Gyamfi Osafo Maafo, has left many of them in outmost disbelieve.

Edmund Fianko, had joined the Authority as a National Service Person in 2005, and worked with the NCA, rising through the ranks to a Principal Manager, Engineering before his current elevation to Deputy Director to Engineering Division.

Mr. Fianko, holds a Master’s Degree in Communications Management from Buckinghamshire New University in England and a Bachelor of Science (BSc) degree in Electrical/Electronic Engineering from the Kwame Nkrumah University of Science & Technology (KNUST).

Speaking at the 2017 Ghana Economic Forum, on Monday, August 7, 2017, Senior Minister said “the public sector is full in terms of employment [and] we can’t employ anybody in the public sector.”

Mr. Maafo, who conceded that Ghana’s economy was currently in a mess, stressed that the public service was “full” and “perhaps we may have to even lay some [workers] off.”

He further urged industry leaders, and the business community to partner government to establish furnish tertiary institutions with state of the art laboratories to enable them train more researches and engineers for the country adding that “if we do not get our minds set into this direction, we are heading for trouble as a country.”

Mr. Maafo’s remark seems to be in sharp contrast to declarations by the governing NPP, when they were in opposition.

The NPP and Mr. Akufo-Addo, heavily criticized the then Mahama government for freezing recruitment into the public sector and accusing them of covering up with the 3-year International Monetary Fund (IMF) agreement.

But at the event, Mr. Maafo, highlighted four areas he said government was keen in developing to boost the Ghanaian economy.

“These four thematic areas should be able to change the complete face of our economy and I’m sure with your support – captains of industry, the banks, we should be able to accomplish this as a cooperative effort for the sake of Ghana. Let us think about future generations. This generation should lay forever a foundation that will make Ghana a centre of industry in West Africa,” he urged.

The two day event which ended on Tuesday, August 8, 2017 is themed: “Building a Ghanaian owned economy, 60 years after independence.”

Mr. Maafo at the event, also for the domestication of the Ghanaian economy said, “What are we doing to domesticate that production? Our location even in West Africa is even central; all these should speak to us. Let us resolve to get the economy resolved once and for all. Let us remove this tag of irreversibility on our head that Ghana will do well for some time and later we reverse to the bottom then we climb again to the top that cannot do”.

“Once we set on motion and moving we should make it impossible for any government to reverse that motion. And that is why we are looking at the fiscal responsibility law, so you can’t come and run the deficit anyhow. There should be a law restricting you,” he added. 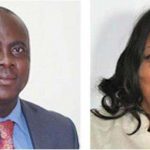