The Attorney General has filed some Twenty-Seven charges including a charge of causing financial loss to the state against former Chief Executive Officer (CEO) of the Ghana Cocoa Board (COCOBOD), Dr. Stephen Kwabena Opuni.

He is being sued together with one Seidu Agongo, CEO of Zeera Group of Companies and Agricult Ghana Limited, beneficiaries of a supposed fraudulent contract worth Forty Three Million, One Hundred and Twenty Thousand Cedis (Ghc43, 120,000).

The contract in question spanned the period 2013 to 2016. The defendants are to expected to make their first appearance in court on March 23.

In all, the defendants will be answering Twenty-Seven charges including abetment of crime, defrauding by false pretence, conspiracy to commit crime and willfully causing financial loss to the state.

According to the suit, Mr. Agongo and Agricult Limited falsely obtained the amount between 2013 and November 2014 by representing COCOBOD to supply Lithovit Follar Fertilizer from Germany for application by farmers on cocoa for the 2013/2014 cocoa season.

The suit said ” Mr. Stephen Kwabena Opuni between November 2014 and November 2015 in Accra in the Greater Accra Region, abeted Seidu Agongo and Agricult Ghana Limited to defraud Ghana COCOBOD of the sum of Ghc 75, 289, 314.72.”

“Stephen Kwabena Opuni on the 10th of October 2014 in Accra, agreed to permit your conduct as the Chief Executive Officer of COCOBOD to be influenced with an amount of Twenty Five Thousand Ghana Cedis (Ghc25,000) from Seidu Agongo”.

The state in the suit believes that the CEO of COCOBOD failed to satisfy the prescribed conditions for single-sourced procurement. The state also concluded that Seidu Agongo and Agricult sold misbranded fertilizer contrary to section 114(1(b) of the Plants and Fertilizer Act, 2010 (Act 803).

Seidu Agongo is also accused of selling adulterated fertilizer contrary to section 114(1)(c) of the the Plants and Fertilizer Act, 2010 (Act 803).

In fact, the state accuses Seidu Agongo of manufacturing the fertilizer in commercial quantities without registration, contrary to the law.

Mr. Opuni, who was relieved of his post in January 2017, had his assets including his accounts frozen by the Economic and Organised Crimes Office (EOCO) in February that same year.

Although reasons for the seizure were not officially communicated, sources at the time hinted Citi News that EOCO was seeking to investigate the entire period he served as CEO of that critical state agency.

Mr. Opuni’s tenure was engrossed in several allegations of corruption and mismanagement of the cocoa sector, with his critics accusing him of running down the critical sector; which generates revenue for the country and employs millions of Ghanaians.

As a former CEO of the Food and Drugs Authority (FDA), Dr. Stephen K. Opuni was appointed by former President John Mahama on November 30, 2013, to head the COCOBOD.

He replaced Anthony Fofie, who headed COCOBOD from 2009.

In April 2016, the General Agriculture Workers Union (GAWU), and the Industrial Commercial Workers Unions (ICU), launched a scathing attack on the leadership of COCOBOD, accusing its Chief Executive Officer, Dr. Stephen Opuni of presiding over corruption.

GAWU and ICU said corruption at COCOBOD, headed by Dr. Stephen Opuni was affecting the production of cocoa in the country.

But some staff of COCOBOD at the time jumped his defence, insisting that, Dr. Opuni has not caused any disaffection within the ranks of COCOBOD as ICU and GAWU were alleging.

The Staff of the company thus served notice of withdrawing from the two unions, citing a growing mistrust between workers of COCOBOD and the unions.

Dr. Opuni has also been criticized heavily by some persons in the National Democratic Congress (NDC), although he served in that party’s administration.

The Greater Accra Regional Organiser of the National Democratic Congress (NDC), Anthony Nukpenu, in an interview with Citi News on January 16, 2017, said Dr. Stephen K. Opuni contributed to the NDC’s defeat in the 2016 polls.

Mr. Nukpenu accused the former COCOBOD CEO of ignoring people who were not within his circles, making it difficult to engage him on matters pertaining to policy with some NDC members or stakeholders.

“People come across him in public settings or private settings and it is like he has a class of people he should deal with. If you don’t fall in that class, talking to him is a challenge.” “For example, I would not go to his office to seek for financial favours or contract favours. I may encounter a challenge in his field of work because I interact with downstream cocoa sector workers. If there is a challenge, I need to meet the CEO and lay it there. And if we find it difficult in meeting him then what are we doing as a government or as a party?” Mr. Nukpenu lamented.
–
By: Ebenezer Afanyi 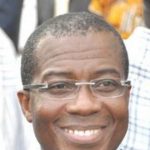