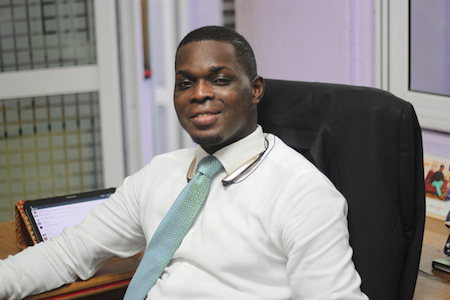 With deep regret I write to draw your attention about a consistent agenda by host of the Super Morning Show, Kojo Yankson and some key staff to damage the reputation of the President of the Republic, His Excellency John Dramani Mahama.

On Thursday, June 23, 2016, the evil intentions reached its peak when Kojo Yankson attacked the personality of the President by calling him an ARMED ROBBER.

This happened between 5.45am and 6am during the presentation of his message of motivation. I was stunned by a rather very unpardonable act for an ordinary host of the radio programme to have grown so much wings to insult an elected President, let alone calling him a thief on a huge platform like JOY FM which is heard live around the world.

Kojo Yankson, has since apologized on his facebook wall after receiving a barrage of attacks and surprise reactions from his foes.

Even in that response, he sarcastically wrote “This morning in the handover with Pastor Ato before the start of the Super Morning Show, I made a joke that has received some attention on social media.

In referring to the recent media attention over the president riding a motorcycle, receiving a car, and owning a gun, I joked that armed robbers could also get media attention for similar reasons.

Some Ghanaians have taken offence to this comment, and this is entirely my fault. As a communicator, I ought to understand that people react differently to information, and jokes about any divisive issue – even when told without malice – will not go down well with everyone”.

I find his response rather insulting because this is not the first time. Kojo admits he is a Communicator and by describing his analogy as a mere joke adds more salt to injury. http://ghanapoliticsonline.com

This is a political season and the host of a programme on a huge platform like JOY FM must be intelligent, smart, forward thinking and cautious of what to spew out.

Previous postings on his facebook wall however exposes his predetermined mind.

Obviously it was deliberate, well timed and it forms part of a broad agenda to prosecute in short, a political agenda.

Insinuations and sarcastic comments he passes with Ato Kwamena Dadzie on the SMS platform during the newspaper review further exposes this dirty agenda.

Multimedia and Joy FM particularly earned a niche over the years but it seems that credibility is lost and the SMS has reached its lowest ebb. Kojo Yankson cannot insult the President, describe him as an armed robber, make mockery of him publicly and decide use social media platform to apologize.

Has he considered his family, children listening the programme and the international community who have so much respect for the President and the Republic at large?

I have deliberately monitored JOY FM and other platforms of Multimedia and can confidently conclude staff have either been sanctioned to go after the President and government or management is comfortable with such unprofessional conduct.http://ghanapoliticsonline.com

Besides Kojo Yankson, there is evidence that reporters like Manasseh Azure Awuni, Anny Osabutey, Kwadjo Owusu Apretwum, Francis Abban and lately Joseph Opoku Gakpo have all joined the fray.

Samson Lardi, a lawyer and host of the flagship Saturday Newsfile programme cannot be left out. These are just but few of staff openly showing their true colours. I strongly believe this cannot be fair of a media house whose mandate is to tow a middle line.

Two weeks ago, Joy FM joined an NPP campaign to mislead Ghanaians that Komenda Sugar Factory has closed down. They sustained it in spite of calls to correct that impression till they were exposed by their own sister station Adom FM.http://ghanapoliticsonline.com

Joy FM’s news has been reduced to a conduit for attacking institutions like the EC and the Police Service.

He insulted her as dumb, incompetent and not good enough for her position as EC Chair. He added, “Are You Crazy?

He is still on air and the public has not been informed about any sanction him.

Management of Multimedia Group’s continued silence confirms they are comfortable with the falling standard.

I wish to remind them of the near attack on Asempa FM when a group of NPP supporters stormed there in 2012 to attack Nana Kwabena Bobie Ansah then host of political talk show Akan programme ‘Enkosi Sen’.

The timely intervention prevented mayhem. The course Joy FM is charting is very provocative and is gradually inciting a section of the public.

I demand the immediate dismissal of Kojo Yankson if management respects the Office of the President, his personality and Ghanaians as a whole.

I am also by this letter drawing the attention of the National Media Commission and the Media Foundation for West Africa, the Ghana Journalist Association to critically examine this trend and act.

It is better to ask these unprofessional journalists to be fair else they may be bundled together and dealt with as ‘political animals’.

Failure to act now will be put on record and no one must be seen to defending them in the name of media fraternity should anything untoward happens.

I pray not but the ball is in the management of Multimedia and Joy FM’s court.