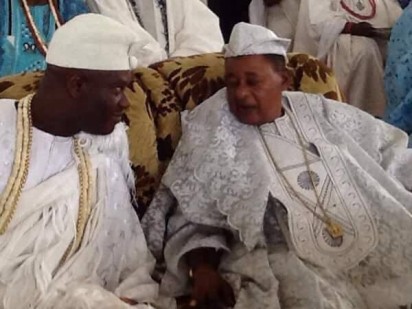 Ibadan—YORUBA monarchs  have described Sunday’s visit by the Ooni of Ife, Oba Eniitan Ogunwusi, Ojaja II to the Alaafin of Oyo, Oba Lamidi Olayiwola Adeyemi III as the beginning of a glorious dawn  that would end marginalization of the South West zone in the polity.

The traditional rulers, under the aegis of Yoruba Obas Conflict Resolution Committee, said this after a meeting held at the Ibadan residence of the convener of the committee, the Olugbo of Ugbo Kingdom, Oba Frederick Obateru Akinruntan, Okoro Ajiga 1.

The kings have been apostles of peace and unity among Yoruba Obas and had long ago been engrossed on how the duo of Ooni and Alaafin would come together and make the zone forge ahead.

Oba Ogunwusi was at Oyo on Sunday to felicitate with Alaafin who was celebrating his 45th year coronation anniversary, thereby cancelling a 79 year old cold war between the two monarchs.

Reacting to the memorable re-union, Secretary of the Committee, Oba Saliu Azeez, Sabiganna of Iganna, who spoke on behalf of the rulers, said the visit would go a very long way to positively affect the Yoruba as a nation.

Sabiganna, who was flanked by Oba Joel Daodu, Ololuyani of Iyani- Akoko in Ondo State described the move as  a glorious one.

He promised that the peace and Conflict Resolution Committee would consolidate on the Ooni’s initiative to ensure that Obas in Yorubaland remain united.

Coming together of the two rulers, according to him, would engender peace, unity and progress of the Yoruba nation.

While he said the cordial relationship would certainly correct so many wrong things, he said that “if the head is okay, it will definitely be well with the entire body”.