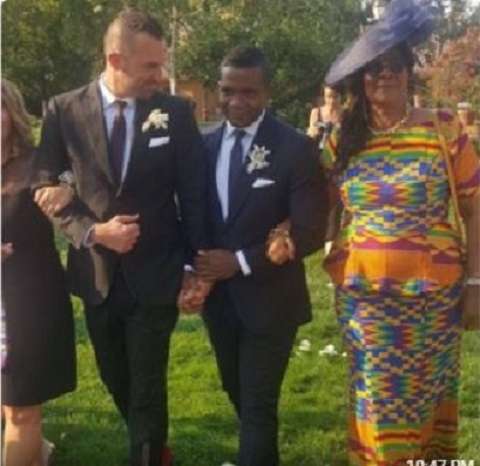 A former school prefect of Achimota School has married his gay lover in the United States of America.
In Ghana, many people frown on the concept of gay marriage. The country’s Parliament has been called on to impose stricter laws against homosexuality.

Meanwhile, the Speaker of Parliament Prof Mike Ocquaye has given the strongest indication yet that Ghana will not legalise gay marriage.

However, this did not deter Stephen Kabutey Ofoi Ceasar’s from taking what many have described as a bold decision.
Photos and videos of the wedding are on social media showing the happy couple and their families who supported them in the event.

Stephen Kabutey Ofoi Caesar was once a school prefect at the Achimota School between 1993/1994 and also the host of Smash TV, an entertainment program on Metro TV.
play

Meanwhile, a group of 8 Ghanaians in Canada are seeking out signatures to force the government of Ghana to respect the rights of the LGBT community.
Many Ghanaians have lashed out at these petitioners and also Caeser for his marriage to a fellow man.