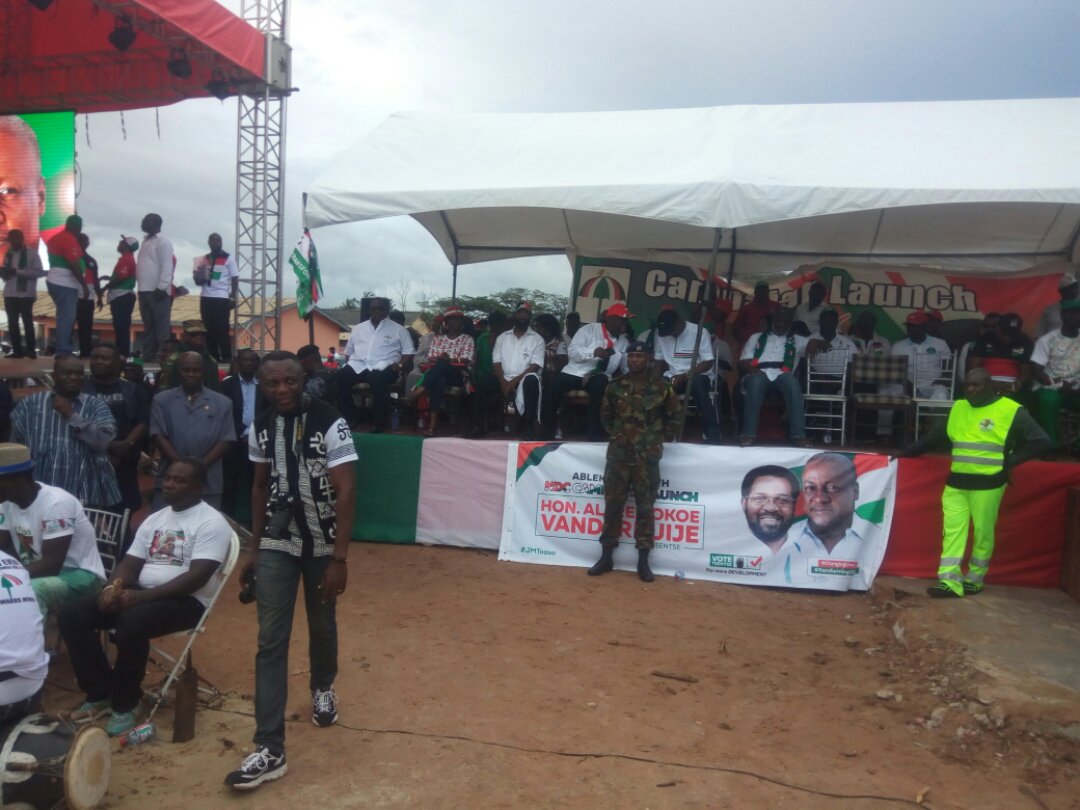 The road to Parliament by the Metropolitan Chief Executive (MCE) of Accra was last weekend cleared after, Dr. Alfred Okoe Vanderpuyie, launched his campaign, as the governing party’s candidate for the Ablekuma South Constituency in the Greater Accra Region.

His intention to go to parliament, follows an opportunity by both the late John Mills and President John Mahama, to allow him serve two terms as the Mayor of the Accra Metropolitan Assembly (AMA) for the last eight years.

At the launch at Mamprobi on Sunday in Accra, Dr. Vanderpuyie said, his work as Mayor, shows the impressive work the John Dramani Mahama led administration, has performed and asked that his constituents vote massively for him and the President, John Dramani Mahama in December.

He described the many infrastructural projects put up, especially in the Ablekuma South and West Constituencies, as “gargantuan” listing the popular Millennium School project, first of its kind spearheaded by him, water, roads and others social amenities.

According to Dr. Vanderpujie, the Constituency stands to benefit even more in the likely event that he is elected to the August house, come January 7, 2017.

He said, the work of the NDC, were phenomena compared to their opponents, the New Patriotic Party (NPP), who during their 8-year administration, managed to put up only few HIPC projects, which were woefully inadequate. He thanked everybody, especially Mr. Fritz Baffour, national, regional, constituency and the constituents for the love and support, since he declared his intention

Speakers upon speakers, praised the Mayor for the immense contribution to the Constituency and the entire metropolis and asked the electorates, to reward him handsomely with a big victory.

Former General Secretary, Hudu Yahyah, recalled Dr. Vanderpuyie’s love and commitment during the formation of the party in 1992, while in far away Chicago, United States of America (USA).

He said, the Mayor’s contribution to the NDC, was not in doubt and asked that the constituents helped him bring further development to the area by voting for him in their numbers. He described him as a “selfless man” who is hardworking and generous.

Alhaji Yahyah, said the parliamentary aspirant, who at the time ensured that the party stood on its feet and spent so much on party members and executives, who travelled to that country for party work, could not be overemphasized. He is selfless, he maintained
He encouraged the constituents to stick to the aspirant for greater work in future as he becomes their representative in parliament.

The Campaign Coordinator for the NDC 2016 Campaign, who doubles as the National Organizer, Kofi Adams, expressed satisfaction at the rate at which the constituents, were working to ensure resounding victory for both Dr. Vanderpuyie and President John Mahama.

He employed them to minimize the bigger campaigns platforms and rallies and rather intensify the “door to door” campaign brought into the Ghanaian polities by the late Professor Mills.

The incumbent Member of Parliament (MP), Fritz Baffour, thanked the Mayor for supporting him during his two terms. He told the constituents to continue to have confidence in the Mayor, as he knows he cannot disappoint or renege on his promises.

Deputy Chief Executive of MASLOC, Mustapha said, the NDC government unlike the opposition New Patriotic Party (NPP), is for the masses. He said, the party was for everybody and so does not discriminate against where one is coming from.
Speaking in both Hausa and Twi, Mustapha said, the president is above his peers and has delivered on all front, hence the need to keep him in office.

He reminded the people, it was the president, who provided portable water to the hometown of the NPP’s flagbearer, Nana Akufo-Addo.

According to him, the NDC, despite not having its vice president as a Muslim, has supported Muslims more than the NPP, which had but left Muslims at the mercy of the weather during their journey to the holy land Mecca for the 8 years that they governed by ex-president Kufuor and the late Aliu Mahama.

He mentioned the renovated Tamale Airport, where Muslims for the first time this year, travelled straight to Mecca, as well as the Hajj village in Accra.

Regional chairman, Joseph Kwabina Ade Coker, chided NPP MP for Ablekuma West, Ursula Owusu-Ekuful, for claiming the work of the Mayor as hers.
He said, it was disgraceful for the legislator, who goes about saying, the NDC government is “incompetent” to say she built the Millennium School, when in fact, she does not even know where they are located in her Constituency.

Mr. Ade Coker, said the work of Dr. Vanderpujie was glaring, adding through his effort the infamous “Shift System” has been abolished.

The NDC Youth Organizer, Sidi Abubakar said, the victory of the NDC was assured, adding nobody can stand in the way of the party. He said, the victory was going to be so resounding that nobody will be able to challenge it in court like it happened after the 2012 elections.

Sports Minister, Edwin Nii Lante Vanderpujie, who is also the MP for Odododiodioo Constituency, mentioned that the opponent of Dr. Vanderpuyie was no match, because the one who is behind him, Agyir Blankson, also served as a Mayor, but did nothing substantial or meaningful.