Prices had been boosted in recent days by speculation that Russia and members of the Organization of the Petroleum Exporting Countries (OPEC) would reach agreement to slash output in the oversupplied market.

But the upward momentum hit a snag, starting in late Monday trading, after markets became increasingly sceptical about such a deal. News that manufacturing activity in China contracted at its fastest pace in more than three years in January dealt a further blow to sentiment.

At about 1725 GMT on Tuesday, US benchmark West Texas Intermediate for delivery in March stood at $30.32 a barrel, down $1.30 compared with Monday’s close.

Last month’s rise in prices “was based on shaky foundations, namely hopes that Russia and OPEC would agree to cut output”, Capital Economics said in a market commentary.

“We doubt that there will be any coordinated agreement even though the market remains oversupplied. Meanwhile, US inventories of both crude oil and gasoline have continued to build over the last month. Indeed, US crude oil stocks are now at record highs.”

Oil has lost around 70 percent of its value since June 2014 as supplies piled up and demand was hit by a global economic slowdown led by China, the world’s second biggest economy.

Government data on Monday showed China’s Purchasing Managers’ Index, which tracks activity in factories and workshops, fell to 49.4, the lowest figure since 49.2 in August 2012, and below market expectations.

PMI readings above 50 signal expanding activity, while anything below indicates a slowdown.

“Global economic growth remained lacklustre at the start of this year,” Dutch bank ABN-AMRO said in a note. 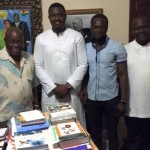