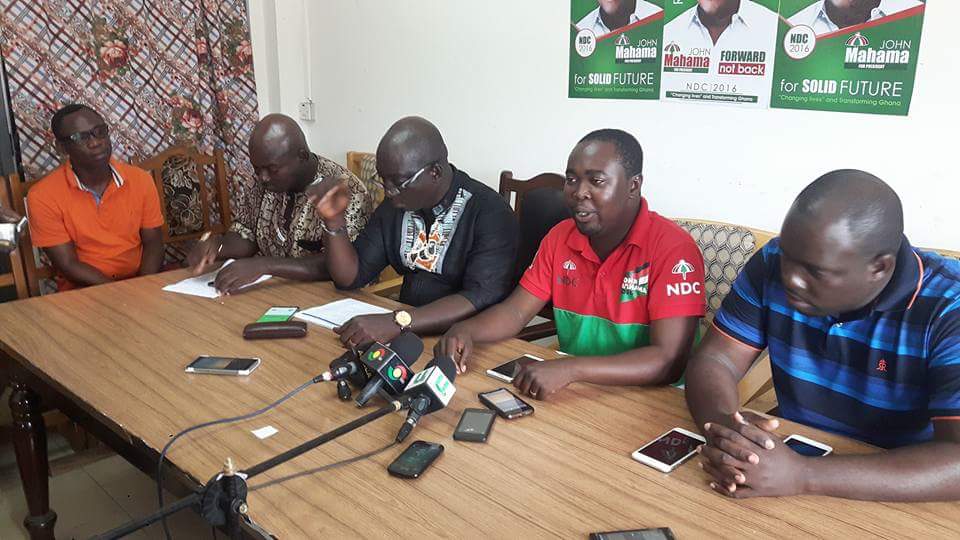 The Eastern regional secretariat of the NDC says the 2016 manifesto of the NPP has nothing good to offer the Eastern Region.

In a press statement, copied to Ghanapoliticsonline.com, the Eastern Regional secretariat of the NDC said it could only count 7 phrases that captured the Eastern Region in the NPP manifesto as against 33 phrase counts in the NDC manifesto for the region.

Below is the full statement.

NPP MANIFESTO HAS NO SOLUTION FOR THE EASTERN REGION

Ladies and gentlemen from the press, we welcome you to the second in the series of our press briefings.

Various political parties have put together programmes and promises meant to be the social contract with the citizenry for the assessment by voters and upon which they should decide and vote in the next few weeks.

We in the Eastern Region have analysed the manifesto of the main opposition NPP and have concluded that the NPP and its Flagbearer Nana Addo have either been overwhelmed by the massive work done by HE John Mahama and therefore had less to do for the Eastern Region or they do not understand the peculiar challenges of the Region and therefore could not prescribe the right solutions.

First of all, a phrase count of “Eastern Region” in its various forms in the NPP manifesto yielded just 7 results as compared to 33 in the NDC manifesto.
We will then go ahead and compare the programmes that have relevance to the Eastern Region. Let’s first start with the similar programmes.

2. The NDC on page 26 promises a new Sports Stadium in the Eastern Region and the NPP promises same on page 48 of their manifesto.

3. Whilst the NDC promises to support private sector to undertake exploitation and refining of the massive iron deposits at Kyebi on page 46, the NPP promises to support the exploration of crude oil in the Eastern Region on page 15 of their manifesto. This is already being pursued by the GNPC as reported by the Ghana Business News. Check link ”

“Apart from these, the NPP promises on Page 24 (g) to build a Tema-Akosombo Rail Link to “tie in with a *vibrant and revived* Volta Lake transportation system to provide a major avenue for expanded transportation and the resulting economic activity.”

It is significant to note that this is a rehashed promise from their 2000 manifesto of which nothing was done about it. We must not also forget that as late as 2000, there were trains moving through Achiase, Nkawkaw, etc. What happened after 8years?

The NPP also admits of a revived Volta Lake Transport and we are grateful to President John Mahama.

These are the only specific programmes that relates specifically to the Eastern Region as far as NPP’s documented promises are concerned.

On the Contrary, based on a deep understanding of the Eastern Region, we in the NDC, despite the massive projects done in the Region and others ongoing, make further commitment to the people in the Eastern Region as follows:

1. We will Complete the University of Environment and
Sustainable Development at Somanya and its satellite campus at Donkorkrom in the Eastern Region (page 16).

2. Additional 20 Polyclinics will be constructed in Ashanti, Volta, Eastern and Upper East Regions (page 20). The Eastern Region on the average will benefit from about 5 of those Polyclinics.

3. We will Complete the construction of regional hospitals in Upper East, *Eastern* and Western Regions (page 21)

4. Eastern Region will be the immediate beneficiary of an Accident and Trauma Center to be built at Nkawkaw (page 22)

6. We will also develop irrigation projects at Amatey and Mpaem in the Eastern Region to support farmers.

7. Now talking about farmers, conspicuously missing in the entire NPP manifesto is how to deal with nomads whose cattle destroy the farms of our poor farmers that often results in conflicts that create both food and human insecurity. In fact, an issue dear to the hearts of peasant farmers in the Fanteakwa, kwahu, Afram plains and Agogo areas received no attention from the NPP and Nana Addo.

Clearly their focus have been on large scale mechanized farmers when we know small scale farmers form a large percentage of the population especially in the Eastern Region.

The NDC will Develop a zone in the sparsely populated parts of the Savannah belt with water ponds and barrage dams to relocate cattle herds from the Agogo, Kumawu, Afram Plains and other parts of the Eastern Region (page 44)

8. The NDC will promote shrimp farming on commercial basis in the Eastern Region and other Regions (page 45)

Ladies and gentlemen, You have been given copies of both manifestos and on the basis of the evidence given, you will agree with us that the NPP has a shallow understanding of the Region and the “solutions” they prescribe do not solve the real challenges we face.

Ladies and Gentlemen, we will have the privilege to Campaign with the President hopefully next week. As we move through the Region, you will witness the massive infrastructure projects being executed by President John Mahama.

You are all welcome to follow the “Changing Lives, Transforming Ghana” Campaign.
Thank you for coming.