The forces wielding machetes went on a rampage and chased away the party supporters as well as journalists who had come to cover the commotion.

The party supporters had come to protest a potential decision by the party to re-run the Klottey Korle NPP primary.

The results of the primary last August which went in favour of Nii Noi had been challenged in court by lawyer Philip Addison who was a defeated candidate in the primary.

Photo: A victorious Nii Noi in August after the primaries

Mr Addison and Nii Adjei Tawiah had boycotted the process because they wanted the elections to be postponed. Only 440 out of 850 delegates were present at the time of the vote leaving 410 unable to exercise their franchise.

The party had agreed to resolve the issue out of court and is considering a re-run.

But supporters of Nii Noi Nortey who won the primaries stormed the headquarters to pressurize the party against taking the decision. They believe such a decision will go in favour of a sore loser, Philip Addison.

But mayhem broke out as the Invincible Forces descended on the protesting party supporters. A windshield of a stationary car belonging to a private individual was smashed.

Joy News’ Afreh Nuamah reports there is heavy police presence following the incident. He pointed out, there are about 10 police vehicles and more than two dozens of heavily armed police officers at the Asylum Down premises of the NPP Headquarters. 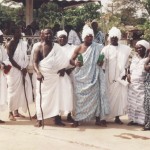