The former Member of Parliament for the Evalue-Gwira Constituency in the Western Region, Catherine Afeku and her husband, Seth Afeku, have been directed by an Accra High Court to pay $217,464.00 plus 50% interest to a US couple they allegedly defrauded.
The Court, presided over by her Lordship Barbara Ackah-Yensu found the ex-MP and her husband guilty of fraud and ordered them to pay the US couple, Patricia and Bill Gick US$217,464 plus interest.

Afeku and her husband have, however, failed to pay the money, an action which compelled Mr. and Mrs. Gick to file a fifa application at the court to auction both movable and immovable properties of the Ex MP and husband. The court granted the application.
The genesis of the case is that Catherine Afeku and her husband, who were then living in the USA entered into a business partnership with the US Couple to set up an internet Café in Ghana. As a result, the US Couple dispatched a total of 300 computers, a Mitsubishi Diamante Saloon vehicle and other equipment for the establishment of the said business venture.
In the plaintiffs’ pleadings, they averred that the 2nd defendant (Seth Afeku) and 3rd defendant (Catherine Afeku) agreed to be partners in the internet Café business in Ghana, after they have paid half of the initial capital invested. Profits for the business venture, according to the plaintiffs, were to be shared on 60/40 basis.
Plaintiffs continued that they duly financed the business by providing equipment and material to the tune of $217,462.00, a Mitsubishi Diamante Saloon car and monies which were duly received by 2nd and 3rd defendants for the operation of the business, under the name of the company -Polymath Enterprise Limited, owned by both 2nd and 3rd defendants.
Plaintiff argued that several calls made to the 2nd and 3rd defendants to account for the equipment, materials, vehicles and monies proved futile. Thy US couple, therefore, filed a writ at the court for an order to recover the aforementioned monies and materials invested in the business.

Defendants (Catherine and Seth Afeku) in their pleadings, however, denied all the allegations saying the averments of the plaintiffs were a total and complete distortion of the dealings and transaction that transpired between the parties.
Defendants argued that it was plaintiffs’ who advised them (defendants) who were then living the USA to come to Ghana to babysit their handicapped. They then make an offer for them to set up the business. Under the agreement plaintiffs were to provide them with equipment, a car and to put them in the same position as they were in the USA.
According to the Defendants, it was also agreed between the parties that plaintiffs would be appointed directors of the business and their fees channeled to helping plaintiff’s son, David Thomas integrate into the Ghanaian society.
They further argued that whatever monies plaintiffs were to give to them as consideration was to be used to set up a business for the benefit of 2nd and 3rd defendants alone. They again contended that when they set up the business, they faxed all necessary documents to the plaintiffs and the latter did not raise objection as being the only shareholders in the company.
Catherine and her husband, Seth Afeku, further contended that the total remittances made by plaintiffs did not even amount to $63,000 and that they were not entitled to any refund at all. That apart, the car and equipment were all part of their resettlement package and that plaintiffs refused to perform their role as directors of the company, notwithstanding the fact that the 2nd and 3rd defendants continued to cater for plaintiffs’ son, David Thomas.
The plaintiffs, however, denied the assertion that the relocation of 2nd and 3rd defendants from the USA to Ghana was for them to look after their son and further denied that their son was physically challenged, for him to be taken care of.
In giving her judgment in the case, Her Lordship Barbara Ackah-Yensu pointed out that: “I find both 2nd and 3rd defendants, particularly Catherine Afeku, not to be credible witness and they mounted the witness box to tell the Court a pack of lies, and it is for this reason that I preferred the evidence of plaintiff that she never saw the company’s regulations”.
The presiding judge continued that ‘I am at my wits end to comprehend how a couple with three children living in the American dream would agree to relocate to Ghana because they were enticed by plaintiff to bring her son to Ghana to baby-sit.
I noticed that Exhibit AAU the draft MOU, had attached to it a documentation pertaining to a $3,000.00 personal loan given to 2nd and 3rd defendants by plaintiff. There were also queries raised regarding how the said loan was going to be repaid considering the intention of defendants to live in Ghana and would not be earning income in the US. I find this very telling”.

The presiding judge in her judgment continued that ‘For me the thrust of the whole matter is the claim by 2nd and 3rd defendants that the investment made by plaintiff was in consideration of them ‘baby-sitting’ plaintiffs’ son, David Thomas.
The said David Thomas as PW1, he testified at the trial. I cannot help but express my total shock when I saw David Thomas. After reading the pleadings, I was imagining a handicapped, disabled young man.

On the contrary, I saw an able young man who walked into the courtroom unaided and spoke eloquently and intelligently. The only thing close to a disability that I saw was that he had a visual impairment which was obviously taken care of by his eyeglasses.
He was able to read everything he was asked to read. It is amazing how 2nd defendant could have described David Thomas as being 99% blind and more amazing that 2nd and 3rd defendant could allege that David Thomas needed 24-hour attention and they were therefore required to baby-sit him.

I am wondering how 3rd defendant expects the Court to believe that she engaged someone who she considers to be disabled and needed 24-hour attention to work for her in her consultancy arrangement and unashamedly concede that the reports tendered in evidence were written by David Thomas, as the same disabled person who is being paid to baby-sit’.
The judge also noted that the arranged marriage between one Dora Ama Afeku who is 2nd defendant sister in law to David Thomas was done to defraud the US couple. ‘It is my belief that the arranged marriage was all part of the grand design by 3rd defendant (Catherine Afeku) to defraud plaintiffs by moving David Thomas from Kumasi to Axim and also milking plaintiffs family’.

Meanwhile Catherine the former MP for Evalue Gwira has told this reporter in an interview conducted in Accra that she has been a victim of circumstance and that the Court failed to hear her side of the story which was the truth.
According to her, she was going to file an appeal against the judgment to set the record straight. This is because, she has taken delivery of a visual confession of David Thomas, son of the US couple confessing how her mother and some prominent Ghanaians ganged up to deny her (Afeku) Justice in the case. 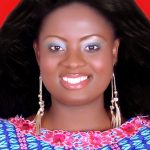