Starrfm.com.gh reports that the exhibition encounter between the two parties will come off on Saturday, September 4, 2021, at the Madina Astroturf.

The NPP and the NDC have been the two most dominant parties in Ghana since the beginning of the Fourth Republic.

It would be recalled that there was a bit of tension between the two parties following the declaration of the 2020 election results.

This was after the NPP and its candidate Nana Akufo-Addo were declared winners of the presidential election.

However, the NDC challenged the results and accused the Electoral Commission (EC) of rigging the polls.

The issue eventually ended up in court, with the Supreme Court throwing out the party’s petition against the EC.

With the elections long over, the social media teams of the two parties have decided to engage in a football match to promote peace and unity.

Dubbed “social soccer”, the event is being organised by The Campaign City and will be used to educate members of both parties on how to avoid breeding chaos on their social media spaces. 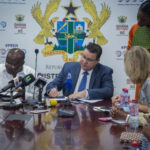