The Acting General Secretary of the New Patriotic Party (NPP), has done the unthinkable by striping his office of pictures of respected cleric; the National Chief Imam, Sheikh Osmanu Nuhu Sharubutu, angering some party members, who are followers of Islam and admirers of the head of Muslims in Ghana.

Also removed from the office of the NPP General Secretary by John Buadu, are pictures of former President John Agyekum Kufuor, which were hanged there by the suspended General Secretary, Kwabena Agyei Agyepong, as acknowledgement of the ex-president’s role and immerse contributions to the party.

Mr. Buadu, has since replaced the pictures of the National Chief Imam and ex-President Kufuor’s pictures with his own pictures and those of Nana Akufo-Addo, the NPP 2016 flagbearer.

In one of the pictures he hoisted, he was seen in an obscure corner struggling to shake hands with the Asantehene, Otumfuo Osei Tutu II.

Interestingly, party insiders have revealed President Kufuor to be the owner of the NPP Headquarters located in Asylum Down in Accra.

The ex-President, is said to be keeping the documents of the house in his Airport West residence in Accra. He is said to have purchased the house and handed it over to the NPP, as its administrative center.

An aide to the opposition flag bearer, Nana Akufo-Addo, Musah Superior, it will be recalled strongly took on the suspended General Secretary, accusing him of not having Akufo-Addo’s portrait in his office.

He went to the open market and purchased a computer generated photograph and placed it in the office, but was rejected by Mr. Agyapong.

The rejection of Akufo-Addo’s computer generated image by Mr. Agyapong, was one of the accusations leveled against him, leading to his suspension by the elements loyal to the NPP flagbearer.

It is not clear, what occasioned the removal of the pictures from the General Secretary’s office which Mr. Buadu is currently occupying after abandoning the office allocated to him in the same building as NPP National Organizer.

Mr. Buadu, who many see as a double agent, immediately rushed for the latter’s office, when he was suspended together with National Chairman, Paul Afoko, Second Vice Chairman, Sammy Crabbe and others, for allegedly working against the NPP 2016 flagbearer.

Many have said that, the removal of the pictures was not politically wise, particularly that of the National Chief Imam, as it could attract hatred for the party.

Others have also stretched the argument to greed and envy on the part of Mr. Buadu, saying he should not have relocated to the office of the General Secretary, but remained in the office of the National Organizer.

In the case of the ex-President Kufuor, his followers have said the removal of his picture by the Acting General Secretary from the NPP Headquarters, points to the fact that the divisions in the party between the Akufo-Addo camp and the Kufuor Camp, is still raging despite attempts in recent times by both sides to project an image of a party united for power.

Several of the pictures forwarded to The Herald by NPP sources stationed at the party’s headquarters, showed a completely different story; Mr. Agyapong’s history as far as that office is concerned, has been obliterated by John Buadu.

A new brown leather chair Mr. Agyapong had sat on, had been replaced by Mr. Buadu with a black one, but the sitting arrangement has been maintained. Other features of that office has also changed. 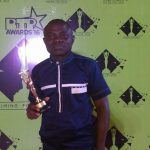