The General Secretary of the opposition National Democratic Congress (NDC), Mr. Johnson Asiedu Nketia has warned the international community that the factors that led to the degeneration of Libya into a modern day slave market have blossomed in Ghana.

Mr. Asiedu Nketia, who returned from Barcelona, Spain, where he had attended a conference of the Socialist International – an association of socialist parties of the world – told journalist in Accra yesterday that he highlighted political goonery that has taken hold in Ghana under President Akufo-Addo.

According to him, the degenerated state of Libya, in which armed groups are more powerful than the government and have established hellish subcultures, including slave trade, had started from similar political goonery.

In Ghana, the goonery by squads affiliated to the ruling party is misconstrued as vigilantism.

Yesterday, Mr. Asiedu Nketia told journalists that unless Ghana rises up to the challenge and stamps out the subculture of impunity, the country could degenerate into a dystopia like Libya.

“All you need is for an outside force to come in and sponsor these vigilante groups and you would have terrorists on your hands,” he said.

Giving a brief on an address that he had delivered to the socialist international conference in Barcelona Spain, which he had given in his capacity as one of five Vice Presidents of the SI Mr. Asiedu Nketia said most conflicts around the world can be resolved peaceably.

He had spoken on the theme, “Working for Stability and Peace in a World of Multiple Conflicts.” His point of view, had later been factored into a nine point resolution that the SI had adopted at the end of the conference.

Among others, the SI had taken the position that secession confusion between Catlonia and Spain is an issue that can easily be resolved with dialogue since the majority of Catlonians, do not really wish to secede bu to have more autonomy.

The SI also called on Myanmar, to as a matter of right, end ethnic cleansing against the Rohingya Muslim minorities in that country and prepare to get them relocated to their country from neighboring Bnagladesh where they live as refugees.

The SI also made a clarion call on the US and North Korea to come to the negotiations table and iron out their differences over the nuclear cold war that has the world on tenterhooks. SI has since also undertaken to dispatch a delegation to all socialist parties in neighboring Japan and South Korea to explore ways of getting SI play more active role in the conflict resolution efforts to calm tensions between the US and Northe Korea.

The resolution also called on President Donald Trump to exercise restraint in the matter of his intent to repatriate some 120, 00 Honduran, Haitian and Nicaraguans who are domiciled in the US under a special arrangement back to their countries. According to the SI, the conditions that necessitated the arrangement which had been made by the Obama government are still prevalent in these countries.

The SI also condemned the practice of modern day slavery in Libya, in which armed groups capture and sell black Africans like commodities. Most of these victims are said to be killed for their body parts.

According to the SI resolution, the slavery is dehumanizing spectacle that is totally shocking and unbecoming of Libya and its government.

But Mr. Johnson Asiedu Nketia told journalists in Accra that Libya’s current state of dystopia started off from the activities of political vigilante groups, such as are prevalent in Ghana under the NPP government, and that Libya is an exemplary case that should motivate Ghana to nip political vigilantism in the bud. 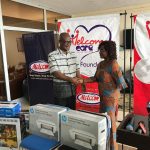