Pollster Ben Ephson says the biggest opposition -New Patriotic Party leader, Nana Addo Dankwa Akufo-Addo ought to revise his assessment on the worst culprits of election rigging in the country.

Ephson pointed to the 2004 presidential election as a cause for concern to his claims.

“In 2004 I saw the elections being rigged around 1:00 pm. But I used my discretion to withhold reports of that incident since that would have triggered skirmishes,” he stressed.

He said the NPP do not have the moral high ground to be leading the charge against a corrupt electoral system, since in the history of Ghana’s polls, he’d evidence of the elephant family engaging in electoral fraud which he authored in a book launched the year after the 2004 polls.

“What I did was to collect evidence of how the rigging was done and I published in a book, which was launched by Vice President Aliu Mahama and John Mahama” he told sit-in host Kweku Owusu Adjei on Anopa Kasapa on Kasapa 102.5 FM Wednesday.

Ephson’s commentary was informed by Nana Addo’s reaction to the rigging banter that emerged between the two big parties-NPP,NDC earlier.

Nana Addo said this illegal practice is exclusive to the NDC in Ghana’s electoral history and that President John Mahama and his Vice, Kwesi Bekoe Amissah-Arthur are the copyright owners of election rigging in Ghana.

The three-time Flagbearer of the opposition NPP was reacting to Vice president Paa Kwesi Amissah-Arthur’s allegation that some opponents of the party are plotting to rig this year’s presidential and parliamentary elections on December 7. 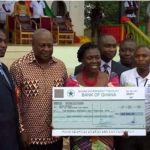