An elder of the New Patriotic Party (NPP) in the Northern Region, Alhaji Alhassan Mahama Adams has predicted the NPP’s defeat in the 2016 general elections following the suspension of the party’s national Chairman Paul Afoko.

According to him, the party is doomed adding that Nana Akuffo Addo’s presidential ambition has ended by this decision.

The NEC upheld the overwhelming decision by the Disciplinary Committee which decided that Mr Afoko be suspended.

The decision was taken in a meeting called on Friday October23, by First National Vice Chairman, Freddie Blay.

The Disciplinary Committee took the decision first, after the National Council of Elders in September, wrote to it, demanding among others, that Paul Afoko, be made to step aside until after the 2016 elections.

Speaking to Radio Gold’s Doris Frimpomaah Adunyah, the almost in tears Alhaji Alhassan Mahama Adams threatened to break ties with the NPP together with some party executives in the Northern region.

“It’s a very sad day for the NPP and for Nana Addo himself and for those people who sat in the office and took this wrong decision. We have broken ties with the NPP, we have nothing to do with it again and I’m telling you that is the end. Nobody should dream he can become the president of this nation after this decision they have taken,” he said noting that Ghanaians will never forgive the NPP for taking such a decision.

Alhaji Alhassan Mahama Adams further urged the leader of the NPP, Nana Addo Danquah Akufo-Addo to condemn the suspension of the party’s national chairman and apologize to party members.

“They have dug their own grave and they are going to fall into it. We will watch them to see how they are going to win this election. This people are never prepared to listen to anybody, even the flagbearer when you call him and advise him you become his enemy. The NPP is doomed due to this decision, it’s a free holiday for John Mahama,” he added. 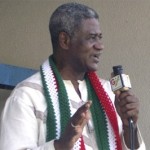