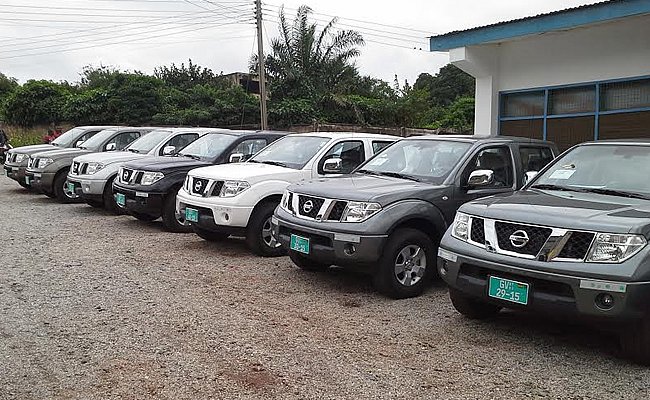 Information filtering into the offices of The aL-hAJJ indicates that President Akufo-Addo’s government has covertly taken delivery of the controversial 43, but now 55, armor-plated luxurious vehicles imported by the erstwhile Mahama government for use by the presidency.

This comes at the time government functionaries and communicators of the ruling New Patriotic Party led scathing onslaught on the Mahama administration for purchasing the customized vehicles few days to exiting office.

Government’s decision to take delivery of the vehicles without the usual media blitz, sources at the Flag Staff House told the The aL-hAJJ, is to escape the wrath of Ghanaians who have been made to believe that the Mahama administration erred in purchasing the vehicles.

According to a source, what has also pushed government to take delivery of the 55 vehicles and yet, remains tight lip is the fear that President Akufo-Addo would be embarrassed if it is made public since he recently announced a freeze on the purchase of new vehicles for government Ministries, Department and Agencies.

The Akufo-Addo government early this year took the Mahama administration to the cleaners for entering into a contract with Amalgamated Security Services Limited for the purchase of 43, now 55, vehicles for the presidency six days to exiting power.

A former Presidential staffer, Dr Clement Apaak, revealed that the Mahama government ordered the vehicles upon the request of the then incoming Akufo-Addo administration. This claim was however strongly denied by a deputy Information Minister, Kojo Oppong Nkrumah who said the new government had no hand in placing the request.

However, The aL-hAJJ’s independent investigations revealed that Mr John Mahama approved the deal for the purchase of some vehicles following a convincing explanation put forward by NPP member on the transition, Ken Ofori Atta, now Finance Minister.

To prepare grounds for government to take delivery of the vehicles [it badly needed after the President’s moratorium on the purchase of new vehicles], acting General Secretary of the New Patriotic Party, John Boadu, said government will accept the vehicles if they find it necessary. Last month, this paper revealed that President Akufo-Addo had instructed National Security Minister, Kan Dapaah; Finance Minister, Ken Ofori Atta and senior officials of Bureau of National Investigations to liaised with the importer of the vehicles to ensure they arrive in the country on time.


The paper quoted a senior government official to have said “government was not necessarily against the purchase of vehicles by the Mahama administration for the new government …the challenge actually was His Excellency’s recent embargo on the purchase of new vehicles for MDAs…so we thought taking delivery of the new vehicles will go against the president’s own directive.”According to the source “it is a fact that the presidency needs those vehicles because it is a shame that, President Akufo-Addo is using his personal vehicle for official duties. We need the vehicles and I think that was why His Excellency directed that we take possession of the vehicles despite government’s earlier freeze on purchase of new vehicles.”

The aL-hAJJ has gathered those the President tasked to arrange for the arrival of the vehicles have executed the ‘job’ to perfection and as a result, the Akufo-Addo government has surreptitiously taken possession of the 55 vehicles they so much chastised the Mahama government of.