With November 7, fast approaching like a train, the politicians, have started all manner of psychological warfare to outwit each other, and garner maximum votes to secure The Flagstaff House – Kanda; Office of the President.http://ghanapoliticsonline.com

NPP sources at the Nima residence of Nana Addo, the NPP headquarters in Asylum Down in Accra, and Danquah Institute (DI) told The Herald that, one of the top secret reports prepared earlier mentioned that, President John Mahama and the governing National Democratic Congress (NDC) were going to lose the upcoming election.

The second report prepared months later, was said to have predicted that the 2016 election, will go to a runoff, because Nana Addo, is neck-to-neck with President Mahama.

Gabby Asare Otchere-Darko; a distant cousin of Nana Akufo-Addo, has been mentioned to be the custodian of these two confidential reports, which the NPP, is relying on to arouse its supporters into battle.

Indeed, the alleged reports according to insiders, are being used to source for funds by Ken Ofori-Atta, Director of Fundraising Committee of the NPP 2016 Campaign led by Peter Mac Manu.

Mr. Ken Ofori-Atta, another cousin of Nana Addo, is being assisted by Kwabena Abankwa Yeboah; the NPP National Treasurer, to raise cash for the campaign.

The Herald, is making frantic effort to speak with elements within the BNI and National Security; Castle Annex to ascertain the veracity of the confidential documents, which most of the NPP sources say, have heard about, but are yet to come across. But Mr. Asare Otchere-Darko; is mentioned to have talked about many times at some party gathering.

This is not the first time that, claims of security reports and research documents are making the rounds in the NPP.

Days ahead of the 2008 elections, the then governing NPP, through the same Gabby Asare Otchere-Darko’s DI, said Nana Akufo-Addo, per their research and those of some international research organizations, was winning the election. The NPP was, however, defeated in the end.

Again, days before the 2012 elections, came many headlines in some NPP-friendly newspapers, claiming some research institutions had put Nana Akufo-Addo, ahead of the NDCs Presidential Candidate; John Mahama, who replaced his boss, President John Evans Atta Mills, earlier in that year, following his sudden passing.http://ghanapoliticsonline.com

Meanwhile, the NDC’s Deputy General Secretary in-charge of Operations, Koku Anyidoho, who said he has also gotten wind of the NPP claims, told The Herald “it is not surprising that the NPP will resort to this banal and outmoded tactics to attempt confusing Ghanaians”, adding “what the NPP is refusing to accept is the fact that the Ghanaian electorate is not uneducated”.

The Director of Communication to President John Mills, who had been involved in a number of national elections, including three presidential elections charged, “The NPP should not think they can fool Ghanaians to vote for them.”

He went on “the more the NPP and Akufo-Addo continue to insult the intelligence of Ghanaians; the more they dig themselves into their quicksand of electoral defeat,” adding “if they succeeded in using such devious antics to win the 2000 election; they should know that the Ghanaian electorate has grown more sophisticated and will not fall for such low-lying shenanigans”.

Mr. Anyidoho told The Herald that “the NDC is staying focused in reaching out to Ghanaians with our solid achievements; and will continue to appeal to the good conscience of the majority of Ghanaians. We will also continue to pray to God to lead us on our chosen path of building a Better Ghana”.

The NDC, he said has “accepts and admits the challenges facing Ghanaians; but what is the alternative the NPP is presenting?

He added that “empty speeches and name-calling will not help Akufo-Addo and the NPP. Fake research findings from non-existent as well as moribund Institutions like the Danquah Institute; will not help the NPP. Besides; what is the fixed address of the DI?

He warned that, as the election approaches; the NDC, is fully aware that, such fake polls would be churned out by the NPP to confuse the electorates; Fake findings attributed to BNI and NS. He asked people to beware of the NPP tactics of also planting such cooked stories in fake foreign papers to deceive them.

He implored the members of the NPP, and its financiers to begin asking themselves questions as to why Gabby Asare Otchere-Darko is always the one in possession of such confidential security reports and research findings at every election. 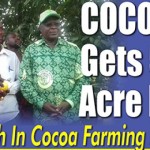