Executives of the New Patriotic Party (NPP) in the Manhyia South Constituency in Kumasi have launched an election campaign dubbed, ‘Room-to-Room geared towards increasing the party’s votes in the area.

Announcing the new campaign, Dr. Mathew Opoku Prempeh, the NPP MP for Manhyia South, said the ‘house-to-house’ campaign of the party in his constituency during the 2012 electioneering season could not help the NPP to win the polls.

He stated that the NPP therefore decided to launch the ‘room-to-room’ campaign in 2016 because it has the potential of helping the party to attract more votes for Nana Akufo-Addo, the NPP presidential candidate, to become president of Ghana in this year’s general elections.

As part of the new campaign strategy, the Manhyia South MP, popularly known as ‘Napo’, said the constituency executives would be divided into groups and assigned various areas.

According to him, each group would be given a number of households where they would enter rooms of the inhabitants and thoroughly explain the plans of Nana Akufo-Addo and the NPP to transform Ghana in the coming years.

“In 2012, we adopted house-to-house campaign and even though it was effective then, the NPP could not win the presidential elections to implement better programmes to expedite Ghana’s development.

“In 2016, we are going for what I term as ‘room-to-room’ campaign, whereby party executives, including myself, are supposed to enter rooms of individuals to market the NPP to the electorate so that we will win the elections massively.”

Napo made the statement at Dichemso Electoral Area during his famous ‘Meet Your MP’, programme, which has so far led him to most electoral areas in Manhyia South Constituency to interact with his constituents.

Ghana is on its way into the abyss due to bad governing style of the NDC administration and NPP members across the country should take the impending election very seriously by campaigning vigorously for Nana Akufo-Addo.

According to him, Nana Akufo-Addo is the only hope for Ghana therefore the citizenry, notably NPP members, should support Nana Addo with their resources, energy and time so that he would win the polls and restore hope to Ghanaians. 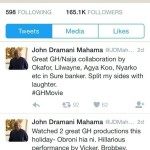